Cyclists and pedestrians - the unbearable tension 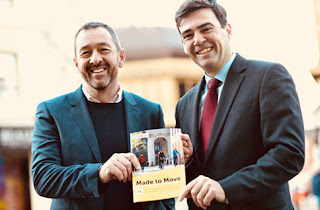 Every morning, when I cross Oxford Road on that last leg into work I will thank a cyclist who has stopped at the traffic lights, or the pedestrian crossing, whichever route I take. Often they seem a bit bemused, but appreciative. My logic is this: thanking people and acknowledging good behaviour starts to normalise it. It also shows respect for people who share the same space.

But here's the thing. About twice a week I'll see a cyclist just power on through a red light, weaving between pedestrians.

I point out that it's a red light. The responses are literally never - "whoops, sorry".

In the last month alone they have included: "Fuck off"; "what's it got to do with you?"; another one motioned as if to spit at me; another rode his bike deliberately at me and laughed - "well get out of my fucking way then". It's always a he, by the way. But I did once see a police officer cautioning a female cyclist on Oxford Road for ignoring a red light.

I probably over react. Maybe I shouldn't confront them because it just makes me cross. But to quote the Greater Manchester cycling AND WALKING commissioner Chris Boardman this week, cyclists are (as are pedestrians by the way) "mothers, fathers, grandparents and children all doing their bit to make Britain a healthier, greener and more liveable place."

We are all human beings inhabiting the same space, but this brutal, dehumanising lack of respect shown by some road users gets us nowhere. And wouldn't your son, daughter, father or mother be so proud that you intimidated another person in pursuit of your right to break the Highway Code?

I know how vulnerable cyclists are. I abhor boorish car and van drivers who provide a far greater risk to life and limb. And I've got rid of my car, I use public transport every day and now that the weather is better I'd like to cycle more myself.

What I also know is that this sense of mistrust, entitlement and rage has to stop. Otherwise Andy Burnham and Chris Boardman's bold and ambitious vision for our city will fail due to a lack of consent, based on intolerance and wilful blindness.
Posted by Michael Taylor at 11:50 am

Good points raised here and all too familiar from my experience. Unfortunate growing trend of militant disregard for other road users and assumption of divine right to cycle as they wish among Manchester's pedal powered commuters. A little more respect for others regardless of mode of transport would make mornings a little happier and safer all round.