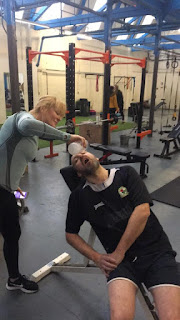 Last year I started training again. Most people my age have some longer term aspirational goal, or a health scare. Me? I just knew I needed to do something again, the scare came later.

That said, feeling persistently tired and having constant junk food cravings aren’t good. I knew that doing the mountain walks with the Freshwalks crew a few times a year, and the full circuit of Marple walk three or four times a week with the pooch, wasn’t going to battle off the middle-aged spread and reduce the chances of getting ill. The stats for sedentary males are a worry - diabetes, heart attacks, tumours, high blood pressure and depression. The comment that stuck with me was that if you can’t find the time for yourself to exercise, expect to give up time to be ill. It became one of those ambitions that I wanted something to work at, but didn't know what. I miss football like mad, but I'm too timid now to risk injury. I even asked the doctor if I was in imminent danger of damaging myself before I took the plunge. I took the bike to work, I used the Mobikes in Manchester when I could and I checked out a few activities at work, but still nothing stuck. I went swimming a few times, but the biggest thing I needed was motivation. With the best will in the world I’m not going to pull off a marathon from scratch and to be honest I just can’t get excited about running. A few years ago I had a personal trainer, Steve Hoyles, who made a big difference and helped me lose weight. Our weekly sessions were good fun, but I was missing too many due to work commitments and I wasn’t sure  what the goals were. I liked Steve’s company and his approach, but wanted something more sociable as well. My pal Will Stone told me about this converted warehouse in Stockport with a no frills approach to fitness and that Steve was doing some work out of there. So, I reached out to Steve again, though events took a slightly different turn.

Five months on I can’t even begin to describe what a difference I’ve felt. Once the introductions had been done, I joined the gym, which almost instantly changed ownership and is now run by Melanie Duffy, a personal trainer who led my first session, under the banner Body Box. There are no machines, no pools, no spa treatments. It is as back-to-basics as they come. Lots of free weights, industrial tyres to flip, medicine balls, punch bags, kettle bells, prowlers and hanging bars. In jest, I say to friends it is not so much a gym as a medieval torture chamber. And I love it.

But the real experience comes from the people I train with. We do our own bespoke workout programmes, but always finish off with a High Intensity Interval Training session. We are as eclectic a group as you could pull together. But the support in the group sessions like ‘HiiT Squad’ ‘Saturday Suicide’ and the punishing ‘Chipper’ is just phenomenal. Someone asked me last week whether I’ve lost any weight and to be honest I haven’t, but I have changed my body shape. More importantly, that's all made me feel sharper and fitter and happier. Sure, some days it hurts, after intense leg work I end up walking like John Wayne the next day, but the warm downs and stretches usually work well enough to avert too many aches. It’s costing me money to buy new trousers as I’ve dropped two waist sizes, even if my pot hasn’t quite shifted yet. I know I have a long way to go, to be as fit as I can be, but the simple act of doing the kind of exercises which were flooring me when I started is such a rush.

At the turn of the year I enjoyed my first post-Christmas sessions and felt a twinge the next day in my lower abdomen. For a day I put it down to training and thought I must have pulled something. It turned out to be much more serious and I had two days in Stepping Hill Hospital hooked up to a drip and on powerful IV anti-biotics. Hospitals are not happy places to be, the consolation that I was reasonably fit and don't drink probably saved me from sliding into a spiral of despair. It was mortifying and upsetting being visited in hospital by my family. The scan revealed no tumours, which was obviously a relief, but the medical advice I'm trying to live by was a stark reminder of the importance of good diet and, of course, proper exercise.

It’s made me more determined to enjoy the gym sessions and take my wellness a bit more seriously. I now have two clinical conditions under control and don’t want another. I was talking to my dearest friend John Dixon about it all recently. We traverse through these ages. Catching up with friends used to be about what great fun times we've been having, then we started taking work seriously, then how our kids are. Now we swap stories of our ailments. There's another age to it, that sort of runs in parallel; what we're doing about it.
Posted by Michael Taylor at 8:34 pm