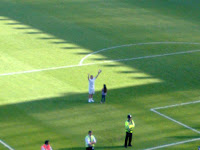 While the rest of the nation was pissing itself laughing at Newcastle United, we were hailing one of the most skillful, creative and exciting players we have enjoyed watching (pictured). Tugay, our Turkish delight, was made skipper for the day, got man of the match and inspired a crowd of English football fans to wave hundreds of Turkish flags and welcome a coachload from the Galatasary London branch onto the Blackburn End.

The game itself was nothing special. We should have scored a hatful in the first half. West Brom couldn't score to save their lives, but had a few chances in the last half hour. Paul Robinson was great, Diouf was frustrating, Vince Grella was rubbish and Tugay showed in flashes why he is special. And the contest was ended with half an hour to go when the referee seemed so sure Jason Roberts had done something wrong.

I enjoyed watching the match with my Dad, who reads the game so well. He notices the pattern of a defender's game better than anyone I know. He can tell Givet is a good 'un. And he politely asked: "This Andrews, what's he like in midfield?"

And so, another year over. It's not been pleasant really. We should have won today and finished two places higher, but the table doesn't lie and over the season we've been pretty poor.

So, today would have cost us £43. The running total for the season therefore comes to £834.82. We got our value, I was able to pass the tickets on to friends and offer them as raffle prizes. And do you know the saddest aspect of the whole thing? I only saw them win twice.
Posted by Michael Taylor at 8:12 pm