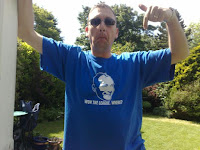 From the moment Alan Shearer lashed in two goals at Selhurst Park in 1992 on the first day of the new Premier League I knew I was incredibly privileged. I knew then I was watching the greatest ever player to pull on the blue and white of Blackburn Rovers.

And once he had pulled on that shirt for a final time at the Tony Parkes testimonial in 2005, his true place in our hearts was secured forever. The bitterness caused by his move to Newcastle in 1996 was finally excised.

I for one could never boo a player who did so much for us. That's why I'm proud to wear a t-shirt (pictured) reminding everyone that England's greatest centre forward won the league. But asking, "where?".

As the "where did Shearer win the league?" song rung out in the streets outside Ewood after we beat Newcastle last season, a typically one-eyed Newcastle fan sneered at me: "Shame he couldn't have done it in front of a proper set of fans."

For that reason, and many, many more, I hope sincerely that Newcastle United get relegated today. Their fans are no better, or proper, than anyone elses. What wasn't proper about the 3000 who roared Rovers on at QPR on a Tuesday night in the race for the 1995 title, or those that blagged into Anfield on the last day, or raised the roof at Ewood (against Newcastle) on VE night. We are a proper set of fans, with all the good and bad that goes with that description. There may not be as many of us. We may be a small town club, but we love our team with as much passion as anyone else. We also have more kids, more women and a younger average. We also have more competition. Within a 42 mile radius of Newcastle there are two other top clubs. You can drive 42 miles from Blackburn and reach Liverpool, Everton, Man City, United, Bolton, Wigan, Preston and Burnley. We don't have as many leery beer monsters and Clone Island morons as others, but we're a proper set of fans alright.

Newcastle excel in one respect: force feeding the myth of their own moral superiority. The club is a shambles. The owner has embarrassed himself and the supporters, while their treatment of Sam Allardyce was atrocious. Not for them the patient and organic growth of a solid squad to satisfy a large supporter base (like Aston Villa, or Everton). No, the same deluded, petulant and spoilt attitude demands jam tomorrow. There are two clubs in the Premier League where the variance between their position in the wages table and the real table is the widest. Blackburn Rovers and Newcastle United. We have consistently punched above our weight. Newcastle, the 5th highest spenders, underachieve more than any other.

Going down will do them good in the long run. It really will. Only Shearer has the well of goodwill to draw from over the two seasons he needs in order to learn how to be a good manager. Anyone else will be hounded out speedily if success isn't forthcoming. A couple of seasons in the Championship is what he needs, rather than joining this endless wave of good English players who are parachuted into top management jobs only to fail through lack of experience (Ince, Southgate, Adams, Pearce, Platt and now Shearer).

So I hope, long term, he does well. But today, he surely must taste failure and the idiotic deluded element of their supporters must learn humility. When they do, other football fans may also afford them some sympathy. But now? I stand with the majority. Come on Villa. Finish the job.
Posted by Michael Taylor at 11:06 am

Absolutley spot on Michael. Shambles of a club and a set of fans who believe the crap they've been fed for the last 20 years.