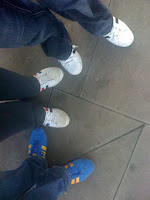 Went to see Awaydays at the Printworks last night. We risked turning into a three stripes Rocky Horror Show by slipping into our favourite trainers. It was a late start which meant Nige had to bail early to get the "ordinary" to Newton. He missed the homoerotic pinnacle of the film, which had been bubbling along all through the story.

The period look and feel was authentic and clearly done painstakingly. Much will be debated about the type of trainers and Peter Storm cagouls, but I thought the looks of the girls and the non-Pack characters as well, were spot on. Every railways scene had been done on the East Lancashire Railway at Bury Bolton Street - both arriving and departing. There was no reference to Tranmere at any point, maybe for legal reasons, and none of the "wools" they fought were named and the actors were all the same. There were countless pop video shots of Elvis and Carty looking into the distance, brooding, groaning with their inarticulate rage as the deadly potion of male hormones raced around their bodies. But these aren't criticisms, just observations, I've noted before how the whole project has had to be stitched together with string and buttons.

But none of this mattered, as it was all about the lad Carty and his aching, yearning, needy relationship with his mate Elvis.

So, much anticipated and not disappointed. 7/10.
Posted by Michael Taylor at 8:10 am

A couple of questions seeing as you have insider business knowledge.

BRFC recently had a takeover rumour regarding 3 separate parties involved with the club taking up a 30% share each. I discussed this with an associate of yours (going by the username of Preston Blue possibly) but when Alan Nixon looked into it he stated the club saw them as "tyre kickers."

Anyway that's not the rumour I'm interested in. People on 2 other forums briefly discussed a takeover by Red Bull (who own RB Salzburg and virtually erased their whole history) a rumour which seems to be based on the away kit being similar to that of RB Salzburg.

For obvious reasons I would probably be opposed to a Red Bull takeover and I doubt there's any truth in it anyway. Nixon said he would look into it but hasn't said anything since so presumably there is nothing. Not a surprise.

Have you heard any other takeover rumours for instance ones with a little more substance than the Red Bull "rumour?"

What's that got to do with Awaydays?