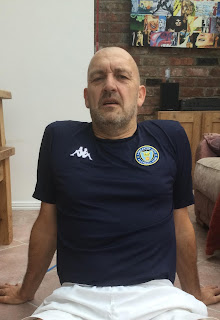 One of the things I've been doing since the very beginning of lockdown is a daily workout. Before you think it's another alpha male with an Instagram account show boating, then it really isn't. I never thought I'd be that person, even when I joined a gym a couple of years ago it was often an effort. I've blogged a couple of times before about where this came from and what that journey has been like.

In February 2018 it was about how training gave me focus and got me fitter.

By July 2019 I was wondering what the next level might be like, getting ripped like Simon Pegg and trying something substantial. In truth, I was plodding along and wasn't very good at goal setting or motivation.

Our gym closed, I tried following some Zoom sessions, but it didn't work. Instead I just thought I'd follow some British Army training moves and the routines we used to do at the gym, but without weights. After a while I found myself wondering out loud what the point was, and finally settled on something I think I'd been avoiding, some proper goal setting.

The thing that has always bothered me about how I looked (and how that affected me) has been my middle. Despite being six foot tall with a slim build, I have what can only be called a pot belly. Despite giving up alcohol and generally eating well, it hasn't really shifted in the few years since I started training. I feel better, and I now have actual shoulders, better stamina, a couple more holes in my belt, and strong legs; but that belly hadn't really shifted. It's always bothered me, and there are incidents and comments over the years that have triggered me. In many ways it's just been a part of me, an element of a negative image of myself that I just priced in.

I researched a set of routines and have now built a six day a week full body workout, with a special day for my major goal - Abs Wednesday. I can't pin point the time it started to make a difference, but it has.  Not ripped, not a six pack, but better.

But though this is the goal, it isn't the main benefit. It's got to the stage now that it's part of the wake up routine. Coffee, news, workout, breakfast, shower. It's a release of endorphins in that middle one that is as important as all of the others to how I can mentally function. Some mornings it's so hard; it gets to the point where I dread a push up more than anything. But I have to go on. I don't have any wisdom, any technical tips, a programme for you to copy, and I'm not trying to laud it over anyone. The point is that I've finally found something that works for me. I'm happy to share the routines with anyone who wants to have a look, but the point is to find something that works for you.

Posted by Michael Taylor at 8:43 pm

Labels: a month in lockdown, fitness