A bit of a lockdown telly catch up 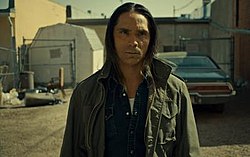 Here are a few things we're watched on telly over the last few months, no spoilers.

I've already posted up reviews of The Crown, Somebody Feed Phil and the feature length documentary The Three Kings, which merited direct and immediate attention, but here's the rest in descending quality order.

Fargo (Netflix) - we're up to series two and three back to back and it was right up there amongst the best telly we've seen during lockdown. The whole Fargo universe is eccentric genius, brilliantly acted and with characters like you've never seen before, even if the one constant is a sympathetic and under resourced  police officer doing his or her best. I really enjoyed the whole brutal gang war in series two, with the outstanding character Hanzee Dent sporting a fantastic green combat jacket. Series three took things up another notch on the bad guy front, with the modern take on global crime in the persona of David Thewlis' enigmatic and verbose V.M. Varga.

Mystery Road (BBC) - The second series of this Australian outback detective drama contained most of the boilerplate features of Down Under noir, corrupt cops and darkly cruel bad guys. It was a good story with a few surprises and twists. Lead actor Aaron Pedersen as Jay Swan does understated very well, but as with so many other Aussie series it's always the women that shine brightest, especially Tasma Walton as Jay's estranged wife Mary.

Hanna (Prime) - I enjoyed the first season where we saw the feral child assassin on a string of adventures, and searching for the sinister truth. Series two was a bit like High Street Musical mashed up with Jason Bourne, in rural England. Preposterous nonsense really, but strangely enjoyable.

Roadkill (BBC) - Much like The Crown, Roadkill was brilliantly acted - especially by Hugh Laurie - but was pretty dismal. I'm always a bit surprised at the cartoon portrayal of politicians, their officials and the deep state. I know we have new levels of venal reality to draw from, but they never seem to have anything other than dark motives. But my main problem with it was that nothing that happened to anyone seemed to have any meaning, and so many of the characters had no purpose, a very strange mix.

Posted by Michael Taylor at 8:32 pm