iFollow is horrible, I can't be bothered with it 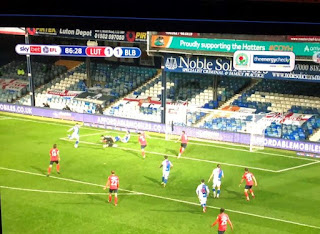 In the last two seasons the fixture I had my eye on more than any other was Luton Town away. Sad isn't it? To actually want to go to ickle racist Stephen's team. But I've never been to Kenilworth Road, the only stadium in the Championship I've not seen my Blackburn Rovers at. There's Brentford's new home, I suppose, but no-one's been there yet. I'm collecting my totals and once this lockdown ends, I'm going to swiftly complete the remaining 12 of the 92.

Just as I posted that I haven't been to a live event since the end of February, the last Rovers match was on the same day. I do miss everything about going to the match, but as followers of this blog will recall, it's a lot to do with spending time with the two of my lads who support Rovers. I really cherish it.

We're instead are offered the opportunity to watch the matches on TV. That means paying £10 per game for something called iFollow. In principle it's a good idea. But I'm going to be as tactful as I can when I say this: it's rubbish. Today's game at Luton was probably the worst of the lot, and in truth I'm not going to bother again. Bad production, terrible lighting, dreadful directing, the commentary I manage to zone out of, but it's not a patch on BBC local radio. The still picture at the top is the precise moment the screen froze for one fan.  The club guilt trip the fans with a message about pirate streams, but I'll say this now - what we saw today wasn't worth £10 for a headache and sea sickness.

As for the game, it was there for the taking and I'm disappointed. Two shocking refereeing decisions at the end from Gavin Ward of Surrey, not the only person in Luton today stealing a living. Bitter? Grumpy? Fed up with football? You bet. 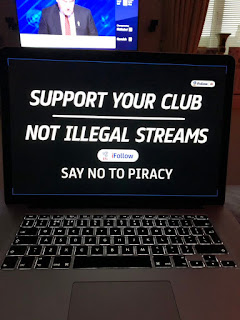 Posted by Michael Taylor at 6:33 pm