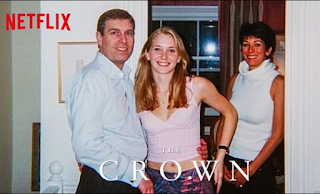 I think most of the acting, set design and period setting in the Netflix series The Crown is as good as anything I've seen. Not only are really good actors cast perfectly, they carry off their roles with studied perfection and attention to detail. Most of the time.

The stories take some liberties. On balance I see how the writer takes a number of known established facts and builds a narrative around presenting them as they may have been discussed and talked about at the time. There probably was no letter from Lord Mountbatten to Charles telling him to stop carrying on with Camilla, but there is supposedly enough evidence to make it a plot device to carry through that tension. Some are inexcusable and exist to simplify, rather than amplify and exaggerate - plenty of critics have piled in on the chronic inconsistencies around Mark Thatcher going missing in the Sahara and the start of the Falklands War.

There are two emotionally manipulative narratives underpinning the whole exercise. One is the moral collapse of the House of Windsor and the sense that a distracted, hapless but well meaning Queen holds together a rag bag of spoilt brats, bullies and spiteful egos. It's the Princess Diana vs the Windsors being played out and it's clear which side The Crown is on. Seeds are sewn too for what we now believe about Prince Andrew. It all feels like it's building up to a terrible reckoning. The future is not yet written, but then clearly the past isn't either.

The other underlying pitch through the 80s is what I can only describe as the Brassed Off view of life. Not even a Boys from the Blackstuff view, but a simplified and romantic paternalism. Maybe that's how we're supposed to see the world; through the Queen's eyes. Some of it though is so obviously geared to that version of truth that it's almost like a parody. It even reminded me of the Comic Strip Presents classic Strike, where Peter Richardson played Al Pacino playing Arthur Scargill.

So we're halfway through season 4 now and are cracking on with it. Season 5 though. Oooooh!

Posted by Michael Taylor at 7:35 pm