The worst political poster ever... 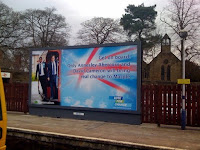 I can think of nothing good to say about this poster which I photographed this morning on Marple train station.

It is absolutely vile.

The type is hard to read. When you do read it you find a meaningless slogan. Then there's the horrible Union Jack background and the sky, which doesn't work on any level at all.

The colours are horrible, the picture is lazily slapped on. The fact that Annesley Abercorn and David Cameron are gurning like idiots and leaning out of the back of an OLD LONDON BUS beggars belief. Your mind drifts to thinking whether an old Routemaster would get up Brabyns Brow.

Then there is the context. It confronts you as you wait for an old horrible train that was brought into service the last time the Conservatives were in power.

It offends the decency of Marple by implying that they understand what it is that needs to change in Marple without ever having been here.

None of this is political at all. But is this the best they can do? Is this the most provocative and inspiring message that the slickest political machine in western Europe can come up with? Demon Eyes, Labour Isn't Working, Labour's Tax Bombshell were powerful pieces of political propaganda. If you were a Tory donor you would have every right to be livid.

However it has one redeeming feature. It is screaming - DEFACE ME.
Posted by Michael Taylor at 7:32 pm

Voices From The Below said...

next time you're driving into manchester, check out the poster opposite the exit to the mancunian way. not as graphically monsterous but it is the subject of some nice (if very old school) defacing.

I can also recommend the video on Annesley Abercorn's website. He doesn't seem to have ventured far out of Marple (there's a brief glimpse of Romiley), and the overwhelming impression is that Marple looks a jolly nice place to live. Which, coming back to the poster, does rather beg the question of why we'd want anyone to bring 'real change' to the place. Oh, and there are endorsements from Dave, Boris and, um, Ken Barlow.