An evening with David Dunn 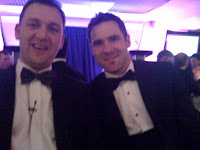 Although this blog isn't about work, and much of my other stuff doesn't cross over into work, on Thursday night we had a wonderful blurring of the boundaries.

It was our Lancashire Dealmakers Awards at Ewood Park. As compere I get to milk the applause at the Rovers, something of a lifelong ambition fulfilled. On Thursday a bloke I've only recently got to know, Alan Townley, came as my guest and persuaded to bring his mate David Dunn - one of my favourite Rovers players.

Now, I have a general rule of not speaking to footballers. I never want the on-pitch persona to colour the more humdrum reality. I'd met Dunny before, but only in passing and as a fan. I've also seen grown men make fools of themselves around overpaid kids. Yet it was oddly different on Thursday. Sure, he knew I was a fan; but he didn't expect anyone to kiss his arse. So there was this bloke I watch every week complimenting me on what I do for a living. He also took a lot of interest in the other guests on the table and obviously has a bit about him. You could almost imagine that if he hadn't been a footballer he'd at least of been a modestly successful property developer or something.

He also brought a signed first team shirt for the raffle, which he didn't have to do. So, full marks to the boy Dunn. He may even make the role model eleven now. He told me a few things too which will creep into the odd post soon, but out of respect I'll keep that low key for now.
Posted by Michael Taylor at 5:25 pm

What do you think about the confirmation of takeover talks albeit nothing imminent? Of course there will be more news in the Sunday People but have you heard anything regarding the issue?