Quite possibly the worst film I've ever seen 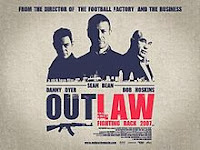 I mentioned in a blog post here that I used to write about music, films, fashion and the like. I concluded that it wasn't my bag and the nasty back channel of music journalism was loathsome. I'm sure there's something equally shifty about film writing.

With that in mind, I watched a film called Outlaw on DVD. It stars Danny Dyer, Sean Bean and Bob Hoskins and is directed by Nick Love whose other efforts have included Football Factory and The Business. Now, I'd heard the audio commentary first, which intrigued me. On it Love and Dyer swear profusely at each other and cry into their beer about the "cwitics" and how the fans love it, acknowledging that some fans fast forward to the violence. Lovely.

You feel their pain. They toil to make a film, not just any film, but they claim it is the most important British film of the last 10 years. A political statement about Britain today.

I have to say, I'm with the cwitics and not the fans. It was quite possibly the worst film I've ever seen. Stylistically it's all there. Plot wise though it's ponderous and predictable. Vigilantes, violence and villains.

That said, if you want a good laugh, do listen to the audio commentary where Love describes how Taxi Driver and Godfather were, er, c***ed by the cwitics. Yes, that's right, they compare this to two epics. Then watch the film.
Posted by Michael Taylor at 8:04 pm