Peter Hook's book on the Hacienda 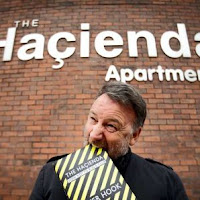 I dived into Peter Hook's book 'The Hacienda: How Not To Run A Club' straight after reading David Nolan's posthumous biog of the late Tony Wilson (review here). It sent me scurrying for music from that era to rekindle memories of nights at the legendary Manchester club. My earliest memory of the Hac is of a student night that hardly anyone went to. It then had an elitist and slightly po-faced phase in 1986 and 1987, which we endured, rather than enjoyed; because I always thought the music sounded poor and door policy was elitist. By the time we left University in 1988 it all changed again and the rest is musical history. For all the house music legends and for all the pretending to look cool, my best night there remains an indie night in the summer of 1988, when I went with friends from Lancaster.
I found the book very easy to read. It's a lucid, lively and candid tale that makes a vital contribution to an evolving history of a fascinating era. The roles of the gangsters, as much as Tony Wilson's mismanagement were what contributed to its demise and should be the focus of any residual anger. Either way there is no club that has inspired such devotion.
6 out of 10.
Posted by Michael Taylor at 4:35 pm

did you see Kevin Cummings new book about the Manchester music scene?

Yes, Rob, I have. And I'm rather hoping that Father Christmas has seen it too.