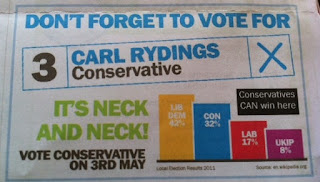 I was delighted to see that the latest leaflet from Marple Liberal Democrats have moderated the ludicrous graphs that misrepresented the support of the rival parties in the local elections, just as the Conservatives have used real stats (pictured). I was also pleased that all mention of "Shan's campaign" against a supermarket on Hibbert Lane had been taken out. Good.

But they still claim credit for freezing council tax, which is a central government policy. There are the usual silly claims about small improvements that are of questionable benefit. One of these is the replacement of football posts on Hawk Green. Anyone can see this is a totally unsuitable setting for a football pitch. It can't be used by local clubs, who are struggling to find somewhere to play, and is unmarked. So why have two full sized metal posts? Nonsense.

Just as I was beginning to think the only active candidate was Shan Alexander, who I have written about here, here and here, and who has a few posters around Marple from her supporters, we received a leaflet from Conservative candidate Carl Rydings. It too draws attention to local problems like potholes, but also includes a few positive notes. He doesn't use dreary electoral strategies as the Lib Dems do, but stands up for his Conservative values. I liked his considered stance on the supermarket issue. He is against Asda on Hibbert Lane - but notes the local desire for a different site for a new supermarket.

There was no presence on the main shopping area of Marple today from any candidate, at least not when I was there at the busy time of 12.30. And posters from the Lib Dems in Marple as a whole outnumber Conservative posters. In fact, even Labour do. But Carl's campaign is targetting High Lane. He's been active on the local internet forum too, but wonder how many votes that will garner.

I noticed as well that not only is council leader Dave Goddard up for re-election in Offerton this time, so too is his right hand man Kevin Hogg in Hazel Grove.

It's going to be a close call, but one wonders how much the Conservatives bad fortnight will impact on the confidence of their vote to turn out. And how much the tainted credibility of Shan Alexander will be a factor with local people - Google her name and see what comes up. At the end of the day it's about turnout, how motivated people are to support their candidate.
Posted by Michael Taylor at 3:39 pm

As you mentioned we are targeting High Lane in this election (due to the fact I live in High Lane). Conservative posters outnumber the Lib Dems in High Lane and (the Marple South part of) Disley. Two leaflets have been put out in High Lane and Strines with one in Marple. This is the most we have put out (leaflets and posters) in years. Unfortunately in Marple South we can't run before we can walk. I am looking forward to the count on Thursday to see what the people of Marple South have decided.

I think you need to have a more active campaign in Marple itself. Whilst it is sensible to target your most promising areas, it is the more difficult areas that bring in those votes that may put a candidate over the top and, given that no Tory is likely to get a more then moderate majority in either Marple seat, this could be your Achilles heel in the hopes you may have in victory.