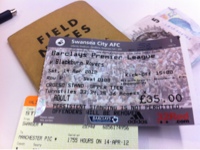 So, a full and shiny new stadium full of optimistic fans, watching a team playing attractive football led by a popular and positive manager under stable ownership.

Those days of 1994 at Blackburn Rovers seem so terribly distant now. But then so too does the team under Mark Hughes that saw a solid side qualify for Europe. As our train took us past Cardiff we saw the scene of a very happy day in 2002, the last silverware won by a Rovers team. When will we ever grace a final again?

Pretty soon the game will be up for Blackburn Rovers at the top level of English football.

For all his positive rhetoric and playing the victim Steve Kean has failed in his mission of creating a young positive team playing attacking football. That dream was exposed as a joke today by a Swansea City team - and a club - that is everything Blackburn Rovers is not.

The home fans sung: "we love our manager" - and so they should. Brendan Rogers is an honest and thoughtful football man who gets the best from his charges. Steve Kean does none of that.

The abject performance summed up everything: no heart from the players, with the exception of David Dunn and Paul Robinson; a somnolent and dejected following of about 1000; and absentee owners who have dismantled the club from top to bottom.

I have no hope of Rovers staying in this league now, none at all, and neither do the players. Rebuilding the club could take 10 years, a period in turmoil, administration and free fall will follow. But more than ever there is the hope that a strong group is ready to rescue the club through supporter ownership and canny management. It can help an "ugly, lovely town" have the lift through football. It's worked for Swansea, as we saw today at the 131st stadium I've watched football at. You have to cling to that hope, because there's nothing else. Not with Venky's, Steve Kean and SEM who have ruined our club.

Posted by Michael Taylor at 6:50 pm

Hi Michael. It was not until recently that I 'stumbled' across your blogs, after searching for articles relating to my beloved Rovers. Your article, writen after the Swansea game says it all for me, especially now after the debacle of White Hart Lane. I, like you, have been to many league grounds supporting Rovers but also watching Stockport County.
Watching the hatters comes from the fact that my parents moved from Blackburn in 1965 to live in High Lane. I attended the local primary school then went to Marple Hall Grammar. Yes I was ridiculed for being a Rovers fan rather than a City or Utd one, but I would not swap it for the world.
I long for the days when Rovers are once again a small, family friendly, well run and passionate club.
Until then I will follow from afar (not to difficult as I live in Cornwall now)
I look forward to your thoughts on relegation and life thereafter.