If you support Labour and live in Marple, then vote Labour 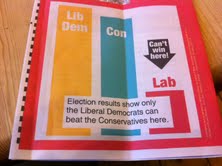 There's a huge cynical lie at the centre of a lot of electioneering. Vote for me, or you'll get the other guy. I fell for it in the Euro elections last year - I voted Green - and yet the awful BNP still got in. I think the Greens are barmy, yet they took comfort from their share of the vote, one of which was cast for entirely negative reasons. Urging a tactical vote is unpleasant. Yet here in Marple the Liberal Democrats are basing their local strategy on it.

The leaflet (above left) includes a hideous chart claiming to show a share of the vote in some unsourced, spurious election. In it, there are just three parties - two of which have a share of vote that looks roughly like 45 per cent and 42 per cent. The third, Labour, is portrayed as having what looks like 12.5 per cent. I've had my ruler out, trust me.

What was the election result in this ward last time? 42, 32, 16, with a 4th party, UKIP trailing on 8 per cent. Even if you are generous and claim the graph is attempting to measure the distance between the parties and starts at 8 per cent and upwards, then it is way off. It exaggerates the Conservative support and diminishes Labour. It is based on nothing except appealing to a negative.

There's a blog here by the great Norman Geras relating to a different election altogether. He says this: "in free elections involving more than two candidates there are a number of options other than voting for one of the front-runners. One can abstain; one can spoil one's ballot; why, one can even vote for a third candidate. These are all perfectly well-known and legitimate electoral practices."

So, there are a myriad of reasons why you should vote for any candidate. Supporting the character of that person, their capacity to serve, an endorsement of the programme of that party.

So, my message to any Labour supporters in Marple is this: if you want to support your party then do so. Don't fall for dismal Liberal Democrat desperation.

In elections you should vote for what you believe in. Here's the thing with the Liberal Democrats round here, especially this candidate - I don't think they believe in anything.
Posted by Michael Taylor at 6:59 pm

I agree that people should vote for the party that best represents their views (or at least some approximation of them) but you kind of trip yourself up in your argument as you have already posted before that the best placed person to beat the Lib Dem councillor/candidate is the Conservative and you do encourage, at least by implication, a vote for him. That is fair enough but it makes your distaste for the (as per usual) election tactics of the Lib Dems seem a bit less than unbiased. I believe Labour voters should vote Labour and I am fairly convinced that they will increase their vote in both Marple wards; whether that will be enough to unseat the Lib Dem and let the Conservative in, I would hesitate to predict.
Nevertheless, best of luck in unseating the Lib Dem and pushing them out in my old Stockport home. If the anti-Lib Dem tsunami of last year finally peaks in Stockport, it could be an interesting - and very long - election night for Councillor Goddard.

Cheers for your comment - I think you're right about Dave Goddard.

It's true, I did describe Carl Rydings as the candidate best placed to beat Shan Alexander. I think that's true, based on previous results in this ward. I hope he puts up a good show, but I wrote that before I saw the horrible LibDem leaflet with its anti-politics message.

I genuinely, honestly, hold the view that you should vote for what you believe in and who you think will best represent this area. I may have held a view in the past that you could vote tactically, but I honestly don't hold that now.

I have made some precitions for the local elections in Stockport, with a special seperate post for Marple, if you are interested.