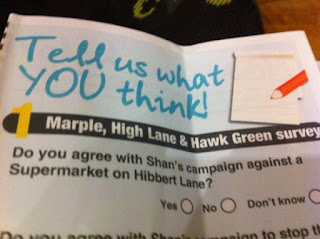 It was mentioned here that the LibDems in Marple would stoop low to get their candidate Shan Alexander re-elected. This leaflet, pictured, is breathtaking in its cynicism.

Fact: Shan Alexander was a governor of Cheadle & Marple Sixth Form College when the issue of a supermarket was discussed. She never opposed it and she never made public to the voters that gave her the right to be a governor that it was possible.

Fact: The campaign against the sale of the land to a supermarket was led by local people, not councillors. She was taken by surprise by the ferocity of the campaign and has asked local activists to tone down the campaign. She has cynically jumped on the bandwagon. She is pictured, below, right, in the dark top and white trousers facing an angry crowd of local people who started this campaign while the councillors had done nothing but hide behind the usual "leave it to us" and "trust us, we're working behind the scenes" nonsense. This eruption of the "Marple Spring" last year shocked them. Had it not happened and been restricted to a few people I have no doubt they would have ushered Asda through the planning application and heralded their support of Marple as a success for "inward investment" and "job creation". Maybe that's too cynical, but it is the view I hear most frequently.

To call it "Shan's campaign" is a disgrace. It is an insult to all the people in Marple who have given up their time to organise and get 1000 people marching in the streets, putting up posters, filling a rally at Memorial Park and collecting signatures on petitions. 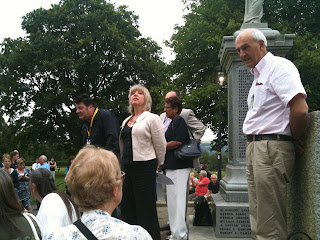 The Liberal Democrats in Marple are well organised and resourceful. I don't doubt they will work hard for their candidate, but claims like this - and there are more - have no place in this election campaign. I would be equally as disgusted if any candidate claimed the "NO to a supermarket on Hibbert Lane" campaign as their own, but I would be surprised. Not so with this candidate or her campaign team.

And another thing, I really dislike the "Labour can't win here" complacency in the leaflets. It bears all the arrogance of a lazy incumbent - it may have a ring of truth to it - but this piece here shows just how the house of cards in Lib Dem Stockport is crumbling.

Make sure you vote in these elections. It's time for change in Marple and Shan Alexander must go.
Posted by Michael Taylor at 9:16 pm

good point, the LibDems have got arrogant in their leaflets and the same old attack on Labour is very stale. However, voting Conservative is not a good alternative unless you support the current government's attack on health, education, the poor, pensioners, etc. What will more Tory councillors do for Marple? There are Green, Labour and Independent candidates in Marple North and Labour in Marple south to choose from.

Thanks Matthew - there are indeed candidates that people can vote for and they absolutely should. An honest debate about what is best for Marple is what is needed. Not scaremongering and cynicism.

I disagree with your premise about the government's "attack" on areas of policy that need reform.