My mate.... Jane Wolstenholme #4 in a series 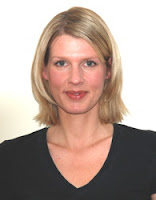 And a random shuffle of my address book today pops out... Jane Wolstenholme. I first got to know Jane, properly, in 2006 when me, Rachel, Jane and her husband Jon Brown got sloshed together at the Grand National as guests of United Utilities. Oh, for the days when conservative PLCs did things like entertainment for journalists.

Back then Jane was editor of the Liverpool Daily Post, the youngest person to hold that position. She's since become a successful chick lit novelist under the name Jane Costello. I've read Bridesmaids, her first, and liked it a lot. She's got an easy style and a good ear for how middle class northern people communicate and think. She's currently working on her 4th novel; the third is due out soon, preview here. But why the name change? Apparently it's easier to get noticed on bookshelves the earlier in the alphabet you are. I'll take her word for it, but has anyone told Tom Wolfe?
Posted by Michael Taylor at 10:07 am