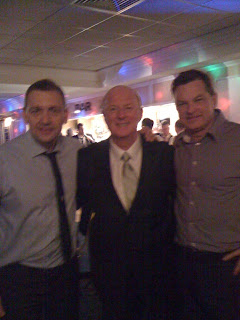 Eagle eyed readers of this blog may have noticed we have been advertising the Marple Athletic Junior Football Club 25th anniversary dinner. We held it last night at Edgeley Park and it was a great success. There were lots of people there, lots of smiling faces from the chaps that started the club in 1985 - well before my time - and a few quid raised to help with the running of the club.

As well as organising the event in the run up to it, I also compered proceedings on the night. Part of which was a chance to introduce the chairman of the club, my mate Jason Isaacs, pictured left with me and speaker Fred Eyre. Here's a rough summary of my intro to him last night and how we know each other as part of this ongoing series of blogs about my mates.

When my eldest son was playing for the Under 8s, one day a different bloke turned up to take training. Joe was full of it, "Jason showed us this, Jason showed us that." As a Dad, you can get a bit jealous of other male role models encroaching on your "My Dad, My Hero" space.

A few weeks later, me and Rachel turned up at the 2006 footy club Christmas do. All the Mums were telling us that this Jason character was a bit of face around Marple back in the day and that he was quite the catch as a young lad. Ok, right. The Dads who grew up round here said he was a good footballer as well.

Then this lovely woman came over for a chat: funny, attractive, welcoming. Who's that? Yes, you guessed it, Jason's wife, Marion.

Changing the subject I asked what the entertainment was going to be that night. Came the reply: "Jason's band". Please tell he's the drummer, I said.

The band, A Few Good Men, with Jason on lead vocals and guitar were brilliant and we've seen them loads of times since. They're a superb covers band and they always put on a good show and change their set every time.

Since then, we've both got involved in the club, Jason as chairman, me as media monkey and we've had some good laughs along the way. He's also taken over Joe's team as they've moved into 11-a-side and played his part in turning my son into a very good footballer, much better than I ever was. Not that I'm jealous.
Posted by Michael Taylor at 8:14 pm