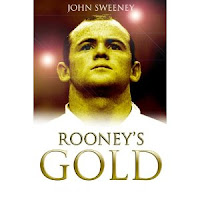 Any book that has fought so hard to get published and been threatened by lawyers from Schillings, acting for football agent Paul Stretford, has to have merit. That was the main reason my interest was piqued in Rooney's Gold by John Sweeney.

This blog post, Rooney's Gold: A Publisher's Tale by Iain Dale, is a good introduction to the saga. Dale's Biteback Publishing have taken the book on and thrown caution to the wind.

What follows is entertaining enough. Sweeney is a funny writer, a little pleased with himself, but essentially he has a good turn of phrase and a newspaper journalist's eye for crucial colour and detail. There isn't much to say about Rooney's life so far, as he's such a young man, but the back story of agents and media deals is where Sweeney has delved with great relish.

The role of Paul Stretford and how he signed Rooney to his agency, and how he somehow got involved with gangsters is all very amusing, if a little frightening. Some of the deep background about Liverpool drugs baron Curtis Warren is just Sweeney showing off that he's read Cocky by Tony Barnes, Peter Walsh and Richard Elias. It tries to build a picture of where Rooney is from, but in so doing it rather overplays the role of the gangster culture in Liverpool.

The other problem with the book is it's out of date already. Random House were meant to publish it in 2007 but were derailed by the legal action, but even now we await a further court verdict that could have greater implications for the ability of Paul Stretford to act for the Rooneys. Within that contains layer upon layer of detail about Stretford, his relationship with Formation Group, where they are going, how he can act for Rooney despite his losing his licence to be an agent for a while. Maybe it's just an anorak like me who wants more of this, but as with the career of Wayne Rooney, so with the dark tales from his entourage: there are more twists and turns to come.