One:objective, an exhibition worth dropping in on 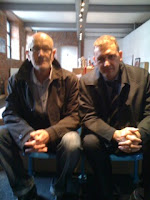 Designers RACE International are hosting a summer exhibition based on the last 20 years in Manchester at their space at Jordan Street in Knott Mill. It contains around 50 objects accompanied by stories from those who've donated their piece. The picture, left, is of Richard Morris and me. He's the curator (creator?) and we're sat on two seats from Maine Road, donated by Sir Howard Bernstein.

Others who've donated include Wayne Hemingway (a rubbish t-shirt), Nick Johnson (cider), Yvette Livesey (a gorgeous picture of her and Tony) and Andrew Stokes (a pair of adidas Manchester rare rare trainers in a glass case bolted to the floor).

There's a space left for Peter Saville and no expectation that anything will ever turn up during the two weeks the exhibition will run for until the end of July.

Richard's piece is a card pointing you to a downloadable tract called, simply, The Manc Candidate. It's a lovely warm and honest account of his experiences through the Olympic bid, some of the Commonwealth Games shenanigans and much more. You can have a look yourself here.

I've donated something, but you'll have to go and have a look.
Posted by Michael Taylor at 8:23 pm