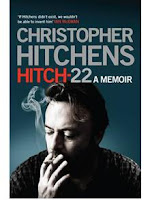 Christopher Hitchens is a profound and prolific writer for whom I have an enormous regard. His features in Vanity Fair are always the best thing in that impressive magazine. He intentionally and deliberately gets up people's noses, so, when you agree with him, such as over his storming book on the Clintons, No-one Left to Lie To, you cheer at his searing wit, his savage pen and his withering turn of phrase. When you disagree, as I do over his outright dismissal of anyone of faith anywhere, I just think he's a boorish oaf - or, to quote someone I'd rather not credit - "a drink sodden ex-Trotskyite popinjay and useful idiot". Even more bizarrely, though I find less to agree with his brother Peter Hitchens about, I find his civility more endearing.

So, here is the memoir of Christopher Hitchens. Better reviewers than me have picked it apart, while the digested read in the Guardian spoofs the consistent tone of self-importance. Terry Eagleton, in the New Statesman, concedes that if you could "swallow some vomit" at yet more name-dropping and slightly sleazy accounts of sexual encounters with men and with women, then he says there is a good tale here. He's right, there is much to commend - much love and affection for his impressive and lonely mother, and a father he couldn't quite work out - he writes so powerfully on 9/11, on Cuba and, not least, a lovely passage on how to drink.

But I was intrigued as much by what he left out; memoirs which are selective have that habit, do they not? For his brother there are just patronising swipes. There is hardly mention at all of his wife, or even his ex-wife, and only cursory mentions of his children - mainly that he was a poor father to them. But that's a choice a writer makes about how much of himself to give.

No, the odd bit is the politics. Though clearly he's a political polemicist, I found it astonishing how scant was his account of the leftist programme he backed, and now does not. Let me explain. Though there's much to be said for any journey from the far left to a more measured view of society, I still find it strange that his move away from Marxist socialism - essentially as much about economics as social justice - comes with no account. He finds no place to at least reconcile capitalism, the global economy, entrepreneurship, wealth and property rights. If you once held so dear a doctrine that was based entirely on an antagonism to those things it seems odd not to say anything of where such issues stand now. Maybe then the mask has slipped? Maybe he was just an angry liberal all along? Maybe then the left in the 1960s and 1970s in Europe and the US was about opposing racism, supporting guerrilla wars in Asia and having a good ruck with the police at a demo.

You'll notice I haven't mentioned Iraq yet, the one issue he has become the most notorious for. I supported the case for regime change in 2003, even though the WMD issue was the one used here, and Hitchens continued to provide ballast for an argument that became almost unarguable through the so-called "insurgency" and to the horror that Iraq became. He does this well, he's a closer observer and a longer chronicler of Iraq than most and fortells a collapse of Iraqi society, post Saddam Hussein and his murderous sons. He is wise after the event though on the lack of preparation for the occupation by the American military and the project he claims credit for chivvying along in Washington. But where Hitchens is at his best is when tells the story of Mark Jennings Daily, a young American who enlisted in the army and died in Iraq after being convinced of the nobility of service by Hitchens' writings. This is heavy grown-up stuff. Proper choking accounts of a proud family deep in grief, but accepting into their home the man who so inspired their son to fight and die.

I made a further error this morning of listening to an interview he did in Philadelphia. He came across as a bit of a bumptious arse. Still, I hope he's better soon, and I'm looking forward to reading his book on another disillusioned socialist and essayist - George Orwell.
Posted by Michael Taylor at 8:21 pm