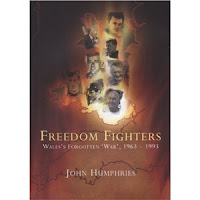 We all remember the spoof Not the Nine O'Clock News item that made light of the spate of arson attacks on holiday homes in Wales. As a terror campaign it was one of a number of outbursts from angry Wales. There was also the bombings of water pipelines following the flooding of villages in the 1960s, attempts to disrupt Prince Charles being sworn in as Prince of Wales and a hunger strike over the plans for a Welsh fourth channel.

John Humphries, a former reporter and later editor of the Western Mail, has written Freedom Fighters, a history of the fringes of Welsh politics, focusing on two groups called Mudiad Amddiffyn Cymru (Movement for the Defence of Wales) or MAC for short and the Free Wales Army.

While the Free Wales Army was good at stunts it was never regarded as a serious force and Humphries regards them as posturing clowns. This FWA video set to the tune of The Alarm anthem 68 Guns on You Tube, rather backs his theory up. He has considerably more time for John Jenkins, the man behind MAC, a bomb maker and cell commander who served time for his bombing campaign and was interviewed by Huw Edwards for a BBC documentary. Two of Jenkins' colleagues blew themselves up (the Abergele martyrs) and it was good fortune which prevented other deaths, but that is what happens when you play with fire. Another bomb that injured someone he claims wasn't one of his, which is convenient. The book will no doubt add to a cottage industry of mythology around Jenkins that I'm pretty sure he doesn't deserve. He created a cell structure where many of the activists never met, or even knew each other, just Jenkins. A structure that was used by the IRA to great effect and which baffled the police and the security services. But though Jenkins was an articulate activist and has since devoted his life to helping the mentally ill, it all rather accentuates the view that terrorism and political violence actually attracts those either too stupid and too lazy to pursue achievable aims through peaceful means.

There was much that must have seemed very unfair to Wales in the 1960s, but when you look at the direction of travel of Welsh interests from the 1980s, then the cause for Welsh speaking and for local democracy has been a vindication of constitutional nationalism.

But, I digress, what is significant about the book however isn't so much the well-composed accounts of the campaigns against the investiture of Charles, or the flooding of the valley of Afon Tryweryn to make a reservoir for Liverpool, but the startling omission of any notion that there has been an achievement of a national independent political structure and a media in a country once struggling to find a sense of identity.

The book trails off with some odd biographical anecdotes, but was worth reading for its first person telling of a crucial story in our recent history and culture. I was interested in it, because I often wonder what draws people to the flame of violence. Why would they give up a life for a cause, in particular, such a lost one? And what, if anything, did their efforts achieve?

As for the arson attacks which persisted through the 1980s and 1990s, the thought remains that while they didn't work in any way shape or form, they did drive an issue to the surface that is as relevant in Wales today, just as it is in the Lake District and Cornwall.
Posted by Michael Taylor at 8:53 pm

"is as relevant in Wales today, just as it is in the Lake District and Cornwall."
Except it isn't .Wales is mostly Welsh people ,unlike Cornwall ,where only 25% have local parents and grandparents. And the Lake District isn't really a distinct "tribe ".
You mean Welsh people selling their homes to the English?

I think I meant that local people are priced out of their locality by second home owners and lack of new building of affordable housing for local people. I think the flooding of Capel Celyn was of a whole more destructive and wantonly violent act than Thirlmere, however. It seemed such a humiliation.