Playing on the hallowed turf of Ewood 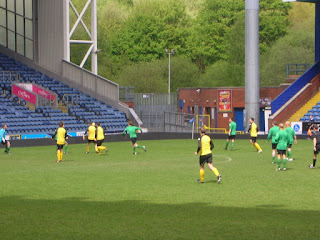 Here is the photographic evidence. That's me in the centre of the picture; stalking the edge of the penalty area as our team sought a goal in our tournament at Ewood Park, the home of football. An amazing day, a dream come true and an experience to remember forever.

I did it to raise money for the Royal Manchester Children's Hospital, a charity I wholeheartedly support. Thanks to the sponsorship of family, friends and colleagues I raised about £1600. You can still contribute here. The whole day made over £45,000 for the hospital.

The other bit of good news is that although I ache all over, I avoided serious injury. And even more positively my team – Denmark (in yellow, I know) – won one and drew two games. Before the game none of us knew each other but we got going and played some really good football. I played two full games of 25 minutes and most of the other.

Thanks too for the encouraging messages. Sadly Fabio was not watching, I did not wear a Burnley shirt to cause Brian Curran to double his contribution and neither did I score, thus failing to win the Kevin Roberts bonus (I was playing left back and had two shots on goal).

There's a piece in the Lancashire Telegraph, here, showing organiser Nigel Haworth celebrating his goal in the first game. He was hoping to celebrate a great deal more as he'd drafted in Rovers veterans Kevin Gallacher and Stuart Ripley, but both withdrew due to injury. We can't complain, it turns out one of our players has also played in the Premier League and still gets paid to play, but I'll keep it quiet just in case.

Posted by Michael Taylor at 7:56 pm