By far the greatest team the world has ever seen

I'll refer those of you who are interested to have a look at Dan Clough's excellent Rovers Return blog, here, for a good summary of yesterday's VICTORY OVER ARSENAL ("young European pansies and a crap goalkeeper"). I still can't quite believe it all happened. He sums up what we pretty much thought, except for the fact that the weak link in Arsenal's defence was Silvestre who was lucky not to be sent off. David Dunn was the most creative player on the pitch in the second half.

Our day was made very special by an act of generosity and kindness from Alan Townley, a good mate of David Dunn, and a bloke I know through work. He organised for Joe and Louis to go in the player's lounge after the match, as a treat for Joe's impending 11th birthday. They had a ball, collecting autographs and talking to players and buzzing from a brilliant and deserved win. 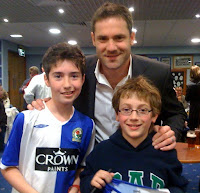 Me? I generally try and avoid talking to players. It only ever ends in embarrassment for me and for them. I've blogged before about my evening with Dunny, here, but that was different, somehow.

Yesterday was more typical. Vince Grella signed a shirt and the books for the lads and in order to break the awkward silence I asked him if he'd taken a knock. "No," he replied, with some sadness, "I was taken off." There was nothing more to say. I couldn't offer sympathy, I couldn't bring myself to join in his brooding sense of hurt, nor could I engage in any more small talk.

Louis saved the day. The confidence and exuberance of a 9-year old who refused to be star struck simply told the highly paid professional that Australia are his second team for the World Cup and Grella looked visibly moved. He smiled at Louis, looked at me, shook my hand and nodded. A moment passed between us, unsaid, respectful, but a moment.

So, another season. That would have cost us £67 if we'd gone on the day, bring the total value of the season's football to an incredible £653. And we paid £400. Unbelievable stuff from a great football club that stays close to its roots.
Posted by Michael Taylor at 9:57 pm