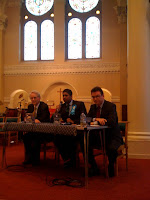 Well, not quite, but well done to Churches Together in Marple for putting on the first, possibly only, debate between the three main parties last night. There were about 120 people there, quite an elderly crowd, the questions were submitted beforehand to the candidates who want to be MP for Hazel Grove, the parliamentary constituency that includes Marple.

I tracked the debate on Twitter @marpleleaf and retweeted the other person who was also commenting. But here's a quick run down.

The questions: as it was a church event there were more ethical questions than at, say, the leader's debates. And hardly anything on the single biggest issue, the economy.

The conduct: I thought all three candidates were decent enough people. They are clearly fighting a clean contest and behaved very well.

In alphabetical order here's how I'd rate them.

Annesley Abercorn, Conservative
Very articulate, very posh and very much a Cameroon. Dived straight in with the core Tory themes: broken society, public sector waste, need for change. He did drift into vague anecdotes about care home owners driving Ferraris and blathered on about Isreal/Palestine, rather than stopping when he was clearly out of his depth. He brought up the immigration issue to attack the Liberal Democrat position in answer to a question on worklessness. 5/10

Richard Scorer, Labour
If you wanted to vote for New Labour you'd struggle round here. Continually distanced himself from "New Labour clones", "the Blairite view" and attacked the "illegal invasion of Iraq". Favours voting reform and higher tax rates for people earning £100K a year. Had a legal answer for many questions, as he is a lawyer at Pannone in Manchester. Declared himself a non-believer but married to a practising Catholic and a supporter of faith schools. 6/10

Andrew Stunell, Liberal Democrat
The sitting MP has the experience and gravitas you'd expect. Clearly works hard on environmental issues and the third world. Declared up front that he's a Nonconformist Christian and gave good answers on moral questions, especially religious conscience - "faith is not an excuse to discriminate and hate". Made a better case for immigration policy than Nick Clegg did. Less impressive on the need for public sector reform and barely touched economic policy. 7/10

The Liberal Democrat surge is a phenomena of this general election, but Hazel Grove has the distinction of being a relatively safe LibDem seat, even though this should be prime Cameron country. The reason for that is that Stunell has been a good constituency MP. Annesley Abercorn will be an MP one day, but he's serving his time here. Richard Scorer may well be a good council leader for somewhere like Huddersfield, but there was only one candidate on show who looked like a winner. I think Stunell won the debate last night, and he will clearly win again next week.
Posted by Michael Taylor at 8:42 am

I'd like to think that Hazel Grove isn't entirely prime Cameron country - the constituency has some history of Liberalism (in Michael Winstanley) and, in Tom Arnold's day, the Tory majority generally remained very small. All credit to Andrew Stunell, though, for building a substantial Lib-Dem majority largely though excellent constituency work.

If the Lib Dems have a part to play in a government it will be interesting to see if guys like Stunell can sustain that brand of community politics.