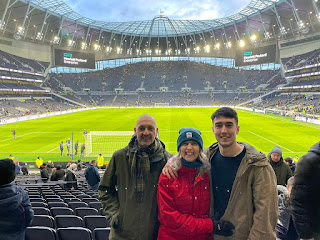 Watching the scores roll in on the Saturday afternoon of FA Cup third round weekend captured every single bit of magic and that clear hope (and dread) of a footballing upset. Every fan of any team cheered the efforts of Cambridge, Kidderminster, Huddersfield and Wigan, except of course if your team, like mine, was one of the vanquished.

And so to the progress on our FA Cup odyssey, picking up on the trail that started at Radcliffe and had most recently found itself most romantically in Buxton. I said I would persist as long as I could. And though there was no room at the inn for the second round tie between the Bucks and Morecambe, it was on telly, and I had bagged the bonus of Buxton’s replay win over Kettering. That was, as I said at the time, as hardcore as it gets for a hardy groundhopper.

And taking in new sights, new grounds, is what this is all about. Today I took in the fourth new hallowed domain of this trip, the Tottenham Hotspur stadium, for the visit of the Shrimps. I think it’s probably the best of all the new builds, and marks my 75th of the current 92 and the 165th stadium I've watched football in. The thought and planning that’s gone into the whole concept is highly impressive, especially when you consider the card Spurs have been dealt. Even when I lived in London I never found the access to White Hart Lane particularly enjoyable, or without difficulty. Choosing therefore to build on roughly the same site, and embracing the gritty urban setting, and still pushing public transport and pedestrian options is a brave move.

Partly as a result of an old habit failing to die as hard as my perceptions of the old ground and its environs, we opted for lunch at Yildiz, the best Turkish grill in London, and deep in Arsenal territory.

But though the Seven Sisters Road might not have anything to compete with pre-match scoff like that, in every other way this was a superlative match day experience. The facilities are better, the food options more diverse, the atmosphere improved, and every lesson in flawed stadium design has been eagerly learned from every mistake made by everyone else, but mainly Arsenal.

On the pitch though, we were in for a treat, served up with pluck and grit by a Morecambe side prepared to embrace the occasion and give it a go. Spurs might have had all the possession, but the blocks of empty seats and a place in the team for what were effectively Conte's triallists showed an institutional lack of respect that gave the Shrimps every motivation to run their bloody noses in it.

Though there was a roar for Morecambe's opener on 33 minutes from their 3000 fans, some 150 of whom may have been at Christie Park for the 8-1 crushing of Esh Winning in 1986 in an early FA Cup memory we will share. But the loudest cheer of the day came for the Harry Kane led cavalry to replace Ali, Ndombele and Gil, and raucous boos as they didn’t leave the pitch, and possibly their Spurs careers, quickly enough. The eventual 3-1 win had a feeling of inevitability about it once the first one rattled in. An ungracious taunting of the visiting fans from parents and children around us, that they weren’t singing anymore, won’t be enough to properly extinguish the embarrassment that a struggling League One side with scant resources took the game this far. Premier League, having a laugh, for sure, but they weren’t laughing in Newcastle last night. 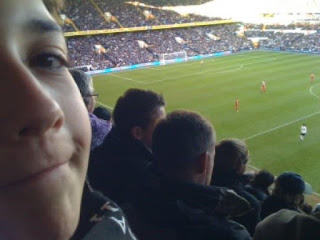 The reason this odyssey is back on is down to our 21 year old soldier son Max, a Spurs supporter. On Sunday 9 January 2011 I took him by trains, buses and tubes across all points of London, via an Ottolenghi cake shop, also close to Arsenal, to an FA Cup third round sweeping aside of Charlton Athletic. It was a special day, and the write up is here. For my Christmas present he made today happen. The circle of life, and the magic of the cup. Pick whichever cliche you want, but it works for me.

Posted by Marpleleaf at 8:42 pm