Don't Look Up is flawed, but great fun and a savage satire for our times 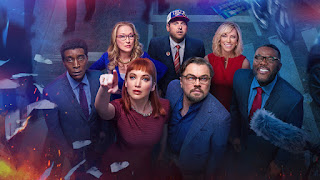 The film that’s got everybody talking at the start of the year has been Don’t Look Up.

The central premise - the high concept - is that there’s a meteorite heading for the earth that’s going to wipe out civilisation. The scientists who spot this are rushed to the White House to brief the President so the powers that be can prepare for, or prevent, this apocalypse.

The rest of the film is a parable for how science is trivialised, weaponised and manipulated. The obvious parallels are with climate change and the current pandemic.

It’s certainly been popular. It smashed streaming records with more than 152 million hours streamed around the world in a single week, according to Netflix.

It’s stuffed full of A-list megastars who all pull off superb if overblown performances, especially Jennifer Lawrence and Leonardo DiCaprio as the scientists and Cate Blancett as a randy TV presenter.

The music is also sensational. From the original score by Nicholas Britell (who also did the music on my favourite TV show, Succession), a new song specially recorded for the film by Ariane Grande (Just Look Up) to the beautiful Second Nature by Bon Iver used at the end, right through to the inclusion of the Four Tops classic Bernadette. It is a masterclass in how to use music in a film.

Yet the movie seems to have really divided opinion - and there have been lots of views expressed already - so let me get my stance out there early: I loved it.

Sure, if you overthink it there is plenty to pick it apart. It’s massively irritating for the usual American exceptionalism that runs through so many Hollywood movies, even ones where the whole plight of the planet is in peril. Like, the whole story is still told as if the only country in the world is America. Yet even this obvious niggle is turned into another layer of satire.

Then there’s the charge that the central character of President Janie Orlean, played by Meryl Streep, is just a crude caricature of Donald Trump. It is. She is. President Orlean is a narcissistic bully, in thrall to big tech, manipulating a supporter base. What else can she be?

British actor Mark Rylance plays a powerful tech tycoon who is socially awkward, downright rude and ruthlessly convinced of his own immortality and superior abilities. Again, the parallels with Elon Musk and Jeff Bezos are plain to see.

But if you think it’s just an attack on easy targets no one really gets off the hook  I liked the way the liberal media - a clear parody of the New York Times - lose interest in the biggest story in the world because of the missed opportunity to use it to attack the President close the mid-term elections.

So much of the film is so frighteningly close to the bone. Just see the reaction of the current media during any serious discussion on climate change. Piers Morgan hectors people about car use, Richard Madeley tries to pick at the reputation of Sir David Attenborough, while Talk Radio’s Mike Graham trying to claim concrete can be organic to a carpenter is probably the most egregious example of dumbing down any serious discussion about the real science behind climate change.

Even here in Greater Manchester, 20,000 people have signed a petition against a clean air zone charge aimed at discouraging tax polluting vehicles. No government is prepared to make any serious attempt to price air travel properly. The popularity of Don’t Look Up suggests many of us recognise that we are sleepwalking towards a disaster, but then isn’t Greta Thunberg annoying?

(Column from the Glossop Chronicle and Tameside Reporter, 14 January 2022)