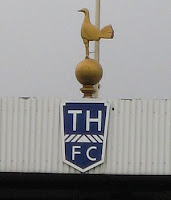 One of my stepsons - bonus children, I call them - is a Spurs fan. His twin brother is resolutely Rovers, but I think there's a twin thing going on. You know, stridently seeking an individual identity that marks him out as different. For Christmas, all he wanted was tickets to go to White Hart Lane. Luckily, I put a few calls in and a top chap of this manor, George Dearsley, assisted us.

The occasion was Sunday's FA Cup tie against Charlton, which Spurs won at a canter. It was obviously a great experience for a 10-year old boy. He loved the whole occasion, the way the seats were high up and steep. He loved the golden cock, left, which was right opposite our eyeline. He loved being amongst Spurs fans, which of course he never is. And his little face just lit up as they sang "oh when the Spurs go marching in", that slow one they like at the Lane.

I also enjoyed a bit of a nostalgia trip down Upper Street in Islington, dropping in at Yotam Ottolenghi's pattiserie on the way there and taking a tour through Stoke Newington, Essex Road and Islington Green on the way back to Euston.

But I wanted to make another observation. Watching most of my football at Ewood Park I'm rather used to being surrounded by kids and even youths. At Spurs everyone around us in the West Stand was a man in his 40s or 50s. Many of them looked like the kind of men that had sons, but were in groups of other similar men. On the train to the ground from Seven Sisters they were men in their 30s who had been in the pub. Coming out along the High Road there were a smattering of younger fans, and a few women, but the more I looked it was clear that this was an ageing male crowd. This, I think I've observed before, is the way of the Premier League. This is the demographic who are in the habit of attending football. The youngsters, the people with families, can't and don't risk it. Splurging so much on a day out that has that chance of disappointment and yet costs so much isn't worth it. Kids have TV, they have their version of football on FIFA 11 and other games and I'm sure they wear all the gear.

I'm sure Spurs are aware of this. And it rather reinforces a point I've always suspected, that the policy at Blackburn Rovers of making football accessible to the people of Lancashire is a wise investment indeed.
Posted by Michael Taylor at 9:26 pm

Michael...I'm a 48-year-old Spurs season ticket holder so fit your demographic precisely. I managed to take my son to that match too as one of my fellow middle aged fans nearby relinquished his seat for me. You're right about kids at football etc. But there's other reasons. One, we're a popular club and have a massive waiting list. My son has been on it since he was nine, he's now 12 and is number 3,000th on the list. So there's not many opportunities for kids. Also, there's only one section of the ground which has a dedicated family section where children get half price tickets etc (and it wasn't the bit you were in). Sorry - long post. But good article. And your son got to see the wizard that is Modric. Best wishes...Mark Solomons

I think kids who try and follow the big clubs with waiting lists may get out of the habit. At the moment there's no firm evidence of a bubble bursting, but the greed machine is in danger of pushing this too far. Liverpool hadn't sold out the derby, Man United's European games are on open sale and there have been empty seats. Same at City.
Cheers, Michael