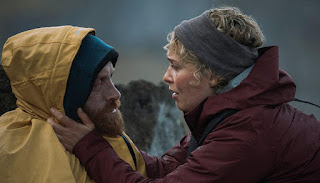 After a solid month in isolation it's been up and down. I've been working from home, exercising every day, eating well and and inevitably watching all sorts of telly and films. I'll do some telly reviews first.

Twin (BBC4) - So we're finally getting into Scandi noir. This was as compulsive as it was implausible. Once you suspend your misgivings about how identical twins aren't so alike and living a different life 15 years apart literally can change you physically, then it's great. All sorts going on by the end and a wild box of intrigue and secrets. Very deft and visually stunning. And yellow coats.

Fear the Walking Dead (Amazon Prime) - I did this the wrong way round, following Lennie James's character Morgan Jones from The Walking Dead into this world. Then, a bit like the show runners did with season 4, which started at the end and showed you how they got there, I then went back into Season 3. I found it to be really very good, some of the best writing and story plotting in the whole TWD universe. But it made me realise how lame season 4 was.

Don't F*** with Cats (Netflix) - deeply strange and unsettling. It started as a doc about a crowd sourced investigation into some creepy sicko and ended up being something very existential about the way this whole messed up world works. But I'd still highly recommend it.

Better Call Saul (Netflix) - wow. OK, I thought this was going to be the last series before it catches up with Breaking Bad. So by the end of the final episode I was panting for breath in terror at what was going to happen to Kim. The two episodes towards the end with the desert scenes were as good as anything from this universe. The whole Salamanca family story is also wild and raging with potential now. We now have two years and 10 episodes to wait. I have a theory....

Sunderland 'til I Die (Netflix) - I didn't enjoy this as much as the first series, but it was structured much more on themes, rather than telling the story of the season, which we obviously know. The boardroom characters came across even worse than last time.

Celebrity Who Dares Wins (Channel 4) - I am always awestruck by Ant Middleton's ability to stick a "fucking" in the middle of words, not just sentences. As in, "get your arse over fucking there and get in the heli fucking copter." I can't imagine any of the celebrities lasted longer than a couple of days. Brutal.

Save Me Too (Sky Atlantic) - as I write I am half way through. Lenny James is a great talent and he has crafted some multi-dimensional non-cliched complex characters that seems utterly unique to other portrayals of how urban estate lives are portrayed on TV. Makes your teeth itch with discomfort, but utterly compelling.

PS - We finished Save Me Too. Definitely the best of this list, by some distance. I think it's the characters Lennie James has created. I said that after the first series, people who live on London estates don't tend to live normal lives in TV drama, they are either victims or perpetrators. And main characters seem to always live in large suburban (usually London) houses that you couldn't possibly afford on the jobs and salaries they do. But the acting was top class too, especially from Lennie James and Leslie Manville, as you'd expect, but also from Olive Gray as Grace.
Posted by Michael Taylor at 11:01 am