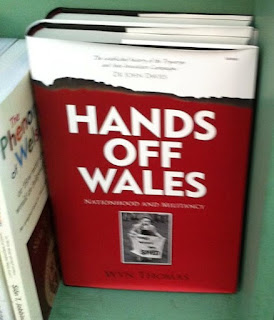 I spotted this hefty tome at the Hay Festival, a couple of years after I had a brief flurry of interest in the militant Welsh nationalist movements of the 1960s and 1970s. Like a lot of purchases from festivals and readings I never got round to reading it. I was however inspired to do so by a recent binge of Welsh language TV series and films.

Though my Dad is Welsh born, and he spoke Welsh as a child, before moving to Lancashire, I'm not as in touch with that side of my heritage. As anyone who has ever visited this blog before will note, I'm a very proud Professional Northerner. But in so being I do recognise the cultural and economic injustices that have blighted Wales and what it has as a special nation.

I dropped the author a note of appreciation this week and rather than compose a long blog review, I just thought I'd share some of the same observations here.

So Hands off Wales, an ambitious and impressive work by Dr Wyn Thomas takes a wise and particular view on a time and place, and pauses to consider how history views political movements over time.

It is a far richer and more thorough analysis than that of two earlier books I stumbled upon, Ray Clews To Dream of Freedom and John Humphries' Freedom Fighters. I developed some real anger and frustration about the militant movements for Wales from reading those. As I said at the time: “But it also served to deepen my anger at John Jenkins from MAC and his high minded lack of accountability for the bombs that maimed an RAF officer - he claims it wasn't "our boys". Neither was the one left in a locker at Cardiff station. But that's the problem with autonomous cells and leaderless resistance, people do their own thing. Nutters who don't and can't make moral judgements.”

I also said on the Free Wales Army: “It also really annoyed me that the FWA were cited as "anti-communist" and "nationalist" but were probably to all intents and purposes neo-fascists. The uniforms, the oaths, the rhetoric. Clews makes no comment about them receiving correspondence from the National Front leader John Tyndall, or their links to the IRA.”

Thomas's conclusions are better nuanced and more considered, as I’d expect, but the showboating and virtue signalling of politics today and the ability to create pop-up movements does lead me to think the last chapter on Welsh nationalism and political identity is far from written.

Indeed, Thomas has also written a biography of John Jenkins, the leader of one of the terror cells, and who now lives in the same village my Dad grew up in. His next work is a real analysis of the scandal of Liverpool Corporation's flooding of Tryweryn. On this evidence, they should be very worthwhile texts to study. But there is more to come, I feel.

I enjoyed the detail and the interplay of personalities in Hands Off Wales. I found myself wondering whether the injustice of Tryweryn and the hollowing out of communities are two sides of the same bad penny Wales has inherited, but also left wondering what political history will make of Welsh attitudes today, the support for Brexit and the uptick in support for Plaid. I guess we’re in unchartered territory now, we all have fears of what kind of dystopian world could emerge, but we’re still holding on to hopes that something better should.

Finally, it's also been inspiring as a piece of historical scholarship. As I plough on with my own magnum opus on a subject particular to my own sphere of interest, this proves that good clear and lively writing is essential to bring a subject and personalities to life.
Posted by Michael Taylor at 2:36 pm