We reflect in these troubled times about all the things we have to look forward to, all the times we can spend with people we're missing, places we can go, new joys we can experience. I'll be honest, a trip to north west Wales may well figure in those thoughts. The scenery, the cute railways, the open spaces. But this is not the Wales of Hidden, its dark noirish second season managing to be even more relentlessly bleak and hopeless than the first, which takes some doing given it pivoted around a lonely man who abducts, rapes and imprisons girls on his farm, with the encouragement of his mother.

And yet, it was a hugely compelling second run out. Without giving away the plot, or how it gets resolved, it doesn't have a happy ending. It simply can't - there are lives torn asunder, as you'd expect with an opening that lays it out from the start - retired teacher killed at home and nihilistic teenagers up to their necks in it. But it's never a 'whodunnit?' but a why dunnit?

Part of the mystery is in the lives of people who are abandoned and neglected. In different ways each character yearns to belong to something, or someone, while lamenting a dark sense of loss.

Wales has been blessed in so many different ways and these are exploited fully in the rich atmosphere that swirls all around each scene in Hidden, sometimes overdoing the long shots of the characters staring into the distance. The slate quarries, the forests and lakes, and the views of the Menai Straits over to Angelsey hang over the individual human tales of loss and sadness as a reminder that people can be capable of such collective mistakes and mishaps. Every single character seems to carry a heavy burden of grief, or are the victims of appalling circumstance - even the offers of something better get snuffed out - be it the stress of raising a newborn child when you have no time, a fishing trip, or that you don't get to go out for a drink with the person who you click with.

There is police procedure, but it doesn't get in the way. Neither do the police seem particularly under resourced to deal with a murder investigation in the way you depressingly see in some urban crime dramas. Though you wouldn't want to rely on the services of a duty solicitor in a Welsh police station if these lot are anything to go by.

The central character DCI Cadi John (played with an understated melancholy by the excellent Sian Reece-Williams) is not only by some distance the most competent police officer Wales has ever seen (see Hinterland and Keeping Faith and you'll see what I mean), but also hugely empathetic, caring and yet pulled in all directions.  And in a refreshing break with TV norms her personal story never overplays its hand, or exacerbates professional tensions with fellow officers who all seem to work for one another. 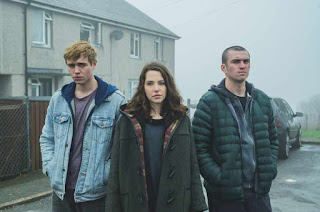 The whole cast of Hidden pull it off with real style and raw emotion. But it is the young actors in particular who are exceptionally strong, especially in the final two episodes where they are called upon to let out their respective despair, cunning and anger (left to right). Remember these names: Steffan Cenydd, Annes Elwy and Sion Eifion, as Conor, Mia and Lee.

As I wrote in appreciation of Welsh noir after the second excellent series of Hinterland, Welsh TV has a great head start on the rest of the UK with a tradition of drama going back to the very beginnings of its own fourth channel S4C. With Hinterland, Keeping Faith, Bang and Requiem, there clearly are a pool of actors, daring script writers and a landscape, literally, to die for.

Posted by Michael Taylor at 7:19 pm