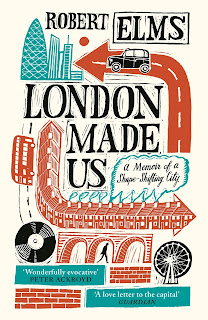 Reading Robert Elms' memoir of his life and of London, I was struck by the passing of both the London I knew and left, and the London I visit and still love.

There's a significance to the timing here. My first born son, Joseph John Taylor, was born in the Homerton Hospital in Hackney on this day 21 years ago. We go back every year or so for a mooch about, but it's much more my city than his. But it's not really mine at all now.
First off, I like Robert "Dutch" Elms and his chirpy BBC Radio London show that I still listen to occasionally on the weekly podcast. Although he's a good few years older than me, his hinterland and curiosities match many of my own, including my favourite street in London - Lamb's Conduit Street - long lost oddities like the Albanian Shop in Betterton Street, Pollo and Stockpot, but also national treasures and Soho staples of my 20s like Bar Italia and the Groucho (wasn't a member, loved going), and the glorious Mangal Ocakbasi in Dalston.

He's got a real grasp of London people and their stories, the places that don't have a blue plaque but were significant for what went on there. Three jumped out at me, a scummy hotel in King's Cross that was a base for the violent nuisance of the far right; the old drinking den in St Giles that was burnt down in Britain's biggest mass murder in 1980; and the flat in Stoke Newington - bang opposite where Joe was first taken home 20 years later - where the Angry Brigade had a bomb factory.

It's full of observational delight, as well as his own life story; but it's his family stories that were intentionally touching, particularly his love for his late mum who sounded wonderful and proud, and the Dad who died at 40 when he was such a young lad of whom he yearns for more knowledge. It comes later when he meets veterans from the Spanish Civil War who knew him as a trade unionist and a good comrade.

He keeps layering on the love, and the laments, but then towards the end, he gets angry as he confronts London's unsustainable housing situation - the unaffordable and soaring prices. He makes the point that anyone who has bought a London property in the last 30 years has won a version of the lottery, but once you've left you can never go back. That was my thought as our removal van chugged up the A10 from Stoke Newington before Joe even reached his first birthday. His kids have grown up in Camden Town, but won't be able to live there unless he leaves the house to one of them and move to his place in the country. And after reading the love letter to his London, that won't be likely. 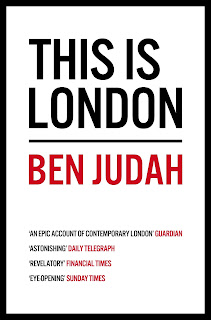 It also made me recall another book I read in the last couple of years that left me quite depressed and unable to articulate with any enthusiasm why that was. Ben Judah's This is London was powerful, hard hitting and packed full of stories of London life. It painted a picture of a cruel and unforgiving city of broken dreams and exploitation of the disparate desperate like the African office cleaners of Barking and piled high Romanians sharing cramped rooms in Neasden.

Ben Judah is a young journalist, he was 27 when this was published, so the force of these stories comes from the stoic pursuit of the testimonies he skillfully extracts from the lives he seeks to chronicle. For Robert Elms this is his life's work, which I speculated he might write after I enjoyed his previous tome, The Way We Wore.

Quite where a teeming and sprawling city like London goes after the Covid-19 pandemic is anyone's guess. There's no alternate reality that the London of Robert Elms contradicts the city of Ben Judah. I just know I was lucky enough to have experienced the delights of the former, without suffering anything of the dystopia of the latter. This is a day to count our blessings, certainly for me.
Posted by Michael Taylor at 7:17 pm

London is one of those places. It's a marmite city in some regards. People either love or hate living there. But for me, it's one of those I'd happily visit buy would never entertaining of living or working there.