Gangs of London - over the top and magnificent 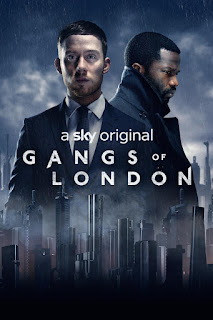 So I see the poster first: Gangs of London on Sky Atlantic. Here we go, I thought: Yardies, East End villains, football hooligans, footsoldiers and a few Russians for good measure. I think that's because I've probably watched too many dreadful British gangster films than are good for me.
I was wrong though. Judged alongside the dross of St George's Day, anything touching on the Essex Range Rover Murders series, Footsoldier, anything with Danny Dyer in it, then Gangs of London was (is) a masterpiece. And so as much as it plays in a higher league than that, it actually stands fairly well in a tradition of British gangster films that depict the shifting ethnic, economic and cultural tectonic plates in organised crime. It starts with Harold Shand ragging off the New York Mafia in Long Good Friday, before stepping into the cross hairs of the IRA.  In a similar way Gangs of London introduces all manner of feuding bad guys, briefly at peace as the increasingly globalised nature of crime interlocks and sustains everyone. None of them behave well enough for you to pause and spare a moment of sympathy on any of them, though to be fair, the Nigerians don't even try. In short order we have Albanians, Pakistanis, Irish, Chinese, Kurds and Welsh Travellers. They all love their families and will do anything for them, but don't particularly care much for anyone else's family. 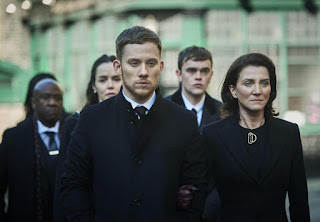 Though these epics aren't meant to be documentaries, their background noise has to have a foothold in current events and a form of reality. Two of the best and most terrifying books I've read in recent years have been Misha Glenny's McMafia and Peter Walsh's Drug Wars. The former was used as the source material for a dreary BBC series which was big on locations and short on any actual action.
Gangs of London is sprawling in every way. All eight part box sets are. This had nine. None were wasted. All were stunning visually, horribly violent and of course had some utterly ridiculous plot twists and character behaviours. Stylistically it was epic and cinematic. Big scenes, expansive, musical scores to lift the sometimes wooden acting. I loved the influences all the way through, not least from director Gareth Evans' dalliances in Asian martial action films, notably the pumping Indonesian powerhouse The Raid. Described variously as Peaky Blinders for the 21st century, Game of Thrones dressed by GQ, or Succession with aggression, every frame.
I've watched them all now - I won't drop any spoilers - but episode 5 was the best. A squad of mercenaries against the Welsh gypsies. For once I picked a side. I've said before about the presence of Mark Lewis-Jones, a great actor who brought remarkable earthy verve to contrast with the relentless march of murderous slick precision. It was a brutal, overwhelming, ear splitting movie style set piece battle. Louder than War, indeed. The whole enterprise is hardly a love letter to London - a sink of depravity, money laundering and blistering double standards in a city that festers with corruption and cruelty - but there's something about the away match in Wales where Gareth Evans is in his prime, using the location beautifully, despite the leap in faith required to work out how they all got there. 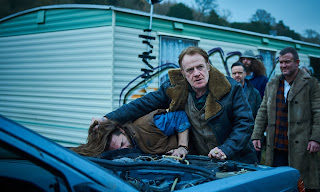 You don't watch gangster movies or box sets for the tug of the heart strings or to snug up sympathetically and share a character's tears. And if you do to Gangs of London then someone will very quickly laugh in your face and remind you why that's a terrible idea. The acting too is at times ridiculously understated and the carnage simply unimaginable. But for so many reasons this lockdown has given us plenty of reasons to totally suspend what we could imagine.
Posted by Michael Taylor at 7:32 pm