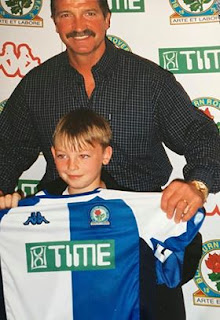 A couple of weeks ago a couple of Rangers fans invited me on to their football starved podcast to do a bit of nostalgic reflection on one of their heroes of old, Graeme Souness. I enjoyed our chat and have dug up the original piece I wrote about the Souness years at Ewood.

And I also found a picture of him from the summer of 2000 with my nephew Jamie Ritchie one of the "Time Team" who launched the new kit.

On Sky’s Monday night Football recently Graeme Souness was the focus of attention and retrospective scrutiny. As well as being an engaging studio summariser and the scourge of Paul Pogba, they made him the subject of a fans question and answer session.

He mainly talked about his time playing at Liverpool and his record as a manager, notably with Rangers and Liverpool. At times it was emotional. He didn’t explicitly say so, but he regretted doing an exclusive with The Sun newspaper just a few years after that paper so viciously slandered Liverpool’s supporters in the aftermath of Hillsborough. He wished he could turn back the clock, he said, quite visibly upset at the memory.

I remain fascinated by Souness as a character. He was truly one of the great players of my lifetime, the captain of one of the greatest club sides of them all. His character, his grit, his drive were forged then. They gave him his reference points for his later career in management. And I would argue, they were to be his downfall in management.

There was only one reference to his time at Ewood Park. He was our manager from 2000 to 2004, where he had some truly great times. And he referenced one of the best players he coached – our very own Turkish delight, Tugay.

Had he been asked about his time at little old Blackburn Rovers, I think I know what he will have said.

In fact, this is what he said in his second published biography in 2013:
“To finish sixth in the league, I think the club would certainly take that now”,
“To get promoted at the first asking, to win a major trophy, to finish sixth, to qualify for Europe twice, I consider that a successful time.
“I definitely regret leaving.”
“I had four of my happiest years in management at Blackburn and I do think now it was a mistake to leave.
“But if I hadn’t left Blackburn then, I would probably still be in management now.”

There’s an alternative history of his later years at Rovers that needs airing.

I’m grateful for all of that success. I appreciate too that there were good players in the team he bequeathed to Mark Hughes. But I had it on pretty good authority that he was a game away from the sack when Newcastle came calling.

Of all his jobs in management Blackburn Rovers was the only job where he exceeded the expectations of the supporters. He revolutionised Rangers in his 5 years there, and deserves credit for that, but that was what is expected of a club of that size in that city.

He needed the Blackburn Rovers job as much as we needed a manager to get us back on the path Jack Walker intended.

Let’s have a look for a moment at the backbone of the squad that won promotion and lifted the Worthington Cup. Picking five players at random – Henning Berg, David Dunn, Martin Taylor, Keith Gillespie, Andy Cole.

He fell out with Berg and sold him to Rangers.

He sold Dunny to Birmingham, a relationship that had broken down.

I frequently remember his withering assessments of Martin Tiny Taylor that he was ‘son-in-law’ material, too nice to be decent centre half.

Keith Gillespie left for Leicester in 2003 with a parting shot at the manager that he didn’t speak to him. In his book, he paints a picture of a manager parading around in a towel and brogues. The respect had clearly gone as quickly as one of Gillespie’s bets on the horses.

He got plenty of goals out of Andy Cole, even signing his pal Dwight Yorke, hoping it would ignite his dynamic partnership from the Manchester United treble winning side of 1999. Despite flashes of magic, like in a final day 4-0 demolition of Spurs at White Hart Lane, it didn’t work.

Cole reported him to the PFA after a series of training ground bust ups. Souness admitted he physically attacked Yorke in a 5-a-side game.

“I regret that. I don’t want to say too much about what happened but certainly it was my fault. I shouldn’t have been trying to play five-a-side at 50 years of age.

“Andy Cole and Dwight Yorke were good players but we fell out in the end because I thought they could be giving so much more. I felt they were taking their foot off the pedal.”

And despite the success of the previous seasons, 2003-2004 was a disaster.

The Rovers squad started to change in the summer of 2003. Damien Duff joined Chelsea for £17m and David Dunn was sold to Birmingham for £5.5m.

And those who left were replaced inadequately.

Out of the cups early. Out of Europe straight away. Only a late burst of form in April fought off relegation.

It’s the heartbreaking paradox of his time at Ewood. In the space of a summer he made the best and the worst signings in the history of the club.

Tugay was a revelation. I remember thinking at the time, he had better be some player to improve on Eyal Berkovic, who I liked.

All managers sign players that just don’t work out. But the £7.5 million signing of Corrado Grabbi in 2001 took some beating. And the bigger the fee, the bigger the flop.

The trouble with Souness seemed to be that this wasn’t just a temporary lapse in judgement.

Many of his signings after that were poor.

Even Lucas Neill, Steven Reid and Brett Emerton failed to make an immediate positive impact, arguably turning in their better performances after Souness left in September 2004.

Imagine for a moment that this frittering away of wages and big fees had been half of what it was. And he left for something else. What would his successor have achieved?

But that’s not it. I think the game outgrew him.

As a player Souness was a winner. He won by ruthless commitment to his craft. He took on responsibility. He also had a clear idea of what his goals were and how to achieve them.

On the Sky programme Souness spoke of his early days as a player at Liverpool. Asking Bob Paisley and Ronnie Moran what he was expected to do. They castigated him. He had to take responsibility himself to fit into a team alongside Tommy Smith and Alan Hansen.

If you think about the players he actually got on with, who he didn’t fall out with, they were cast in that mould. Tugay. Damien Duff. Garry Flitcroft. Stig Inge Byonebye.

I think he resented players who hadn’t had to fight as he had.

But time and expectations caught up with him.

He proved at Rangers that he wasn’t a terrible manager. But they had a clear defined goal. Be better than Celtic.

At Liverpool, it was to get back on that perch. He failed.

When he took over at Ewood in 2000 there was a clear aim. Get Promoted.

Then it was survival.

As a squad that group really kicked on and achieved. But what was the goal after that? Champions League?

I’m not entirely sure any of us knew.

And I’m pleased he has an affection for us as a group of supporters.

“My last game before I left was at home to Manchester United, we were winning 1-0 but then Louis Saha took the ball down with his hand in the 92nd or 93rd minute and they scored. After that game I was asked if I was interested in the Newcastle job. I think at the time John Williams was fairly happy about the deal, because they were getting good compensation for me. But Mark Hughes inherited a very good side with good players. The fans at Blackburn were good to me, they weren’t on your back straight away, they gave you time and got behind you. I can only say I really enjoyed my time at Blackburn.”

The board couldn’t believe their luck.

The idea his career took a dive after his time at Rovers is remarkable. I hope I’ve demonstrated that the decline was already well underway. Maybe there’s a reason he hasn’t worked since.

But for all of that I still like him. Managing these millionaires is a thankless task. Trying to fine them a week’s wages for misconduct is like dropping ten pence for the rest of us.

For all of the memories of that rotten last season and the millions that were wasted. I retain an affection for those early years.

Posted by Michael Taylor at 3:32 pm