Still Holding On after all these years 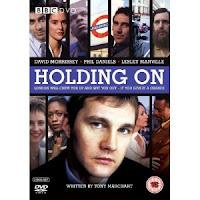 Tony Marchant's sprawling masterpiece Holding On was an 8 part TV series shown in 1997. It features a series of unrelated but vaguely connected stories of London people struggling to get by and understand their lives. Watching it again in 2010, on DVD boxed set in three sittings, we were struck not by how it had dated, but how it hadn't. OK, no internet and no mobile phones, but the whole story could be re-run now and it would have the same undercurrents and convincingly touch the same important fault lines running through urban life: mental illness, corruption, loneliness, racism, ambition, generational conflict, provincial people drifing through London. Highly recommended, if you fancy it then let me know, we've got a boxed set ring going at work, more than happy to pass things like this on to readers and friends.
Posted by Michael Taylor at 7:47 pm