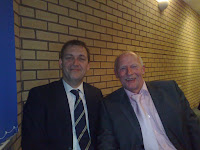 Had a proper treat last night at the Greater Manchester derby match; the top of the table League Two clash between Bury and Rochdale at Gigg Lane.

I was lucky enough to sit next to former Shakers legend Derek Spence over dinner and during the match. The former Northern Ireland international is now working for the community programme at Blackpool, another of his former clubs.

He was great company and a proper old school football man with a great store of tales, anecdotes and opinions. He came off the bench in 1976 in Rotterdam to equalise for the wee country against Holland with Cruyff and Neeskens in the team.

I know it's not normally like this, but it was a brilliant noisy atmosphere with lots of support for both sides and lively banter between the fans. There was even a smoke bomb chucked on the pitch from the Rochdale end. This kind of passionate local football I fell for when I started following Blackburn Rovers in 1977, rather than the easy option of Liverpool, Leeds or Man United.

The game itself was exciting too. Competitive in the first half as the hard pitch meant it was tricky to control the ball. It could have gone either way. Top of the table Rochdale missed a sitter with 20 minutes to go in the second half, and as is the way in such games they were punished within minutes when Steven Gerrard's mate Ryan Lowe took advantage of a lucky ricochet to score for the home side. He said after the game that his mate was going to come and watch him, but it was cold. Bless.

It's the first time I've been to Gigg Lane in 25 years. Almost as long for Derek Spence, by the way. It was lovely to see so many Bury fans greet him with such affection. He stayed in the Legends Lounge long after the final whistle. I get the feeling he'll be back when he can.
Posted by Michael Taylor at 5:40 pm