There's been no movement on the takeover at Blackburn Rovers. There has been a rumour that Red Bull were looking at it, but that was rooted in the new away kit being like that of Red Bull Salzburg who Rovers played in 2006.

They erased Salzburg's past, which didn't go down well with the fans. So don't expect to see a warm reception for this, should it ever come to pass. 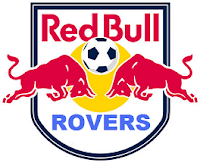 Posted by Michael Taylor at 7:40 pm

Saw this "rumour" myself a while ago. Wouldn't be in favor of it for obvious reasons outlined above. I'm surprised you considered it worth mentioning actually with your insider business knowledge.

History isn't the "be all and end all." After all Jack Walker used the phrase "new Blackburn Rovers" and we all know how much he loved this great football club. Things change sometimes on a colossal scale and in BRFC's case for the better.

Erasing the whole past though is going too far and that's an understatement. It might happen in Austrian football (and to Wimbledon though MK did give the FA Cup trophy back to the newly formed version) but not at a founding league club with the history, prestige and stature of Blackburn Rovers. I'm not the biggest fan of the current owners but I don't think even they would sell to someone like that.

It's not worth mentioning really. But I thought I would.

I don't think you can fault the current owners, to be fair.