We had joy, we had fun, we had a season in League One 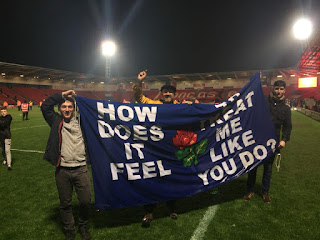 In our darkest hour, we vowed to thee, my Rovers, that we would support our club in the hostile and unfamiliar terrain of League One. And we have.

Best place to visit: Shrewsbury. I like Shrewsbury, it's a really smart centre, decent places to eat and drink and though it's a hike from the stadium to the station, it's a more pleasant stroll than some of the other places we visited. And me and Rachel had a great pre-match catch up with our friend Father Tony McGrath.

Worst train journey: going to Peterborough away was like my morning commute stretched into three hours; hot, crowded, cramped, and never ending. Coming back in a great mood it started well enough as we were sat with Tony Leake, the former referee, then we got to Nottingham where we were joined by idiot Bolton fans, then Sheffield where noisy pissed-up Preston joined the party. I'm seriously too old for that crap.

Best away end atmosphere: so many contenders for this, Doncaster, Blackpool, Bury and Rochdale were all bouncing. But maybe because it was the distance involved and the constant noise, and the positive support throughout, I think Peterborough away was when it felt brilliant to be part of a fanbase that was connected to an improving team. Which brings us to...

Best performance: Nick Hornby's theory is that winning 3-2 is the best ever result because of the emotional journey, especially if the other team score first, and so Peterborough away proved. The second half spell, crowned by the sweeping move which led to the goal of the season from Dack was magic.

Most ashamed to be a Rovers fan: some berk shouting "MK Dons" at Wimbledon is just embarrassing, but being kettled with the Blackburn EDL at Bradford was a grave mistake. Having to walk to the match alongside people who should be locked up was truly depressing. The racism was disgusting, the wanton violence from scrawny scrotes who couldn't punch their way out of a wet paper bag was pathetic, but the looks of horror from the police and ordinary members of the public in Bradford city centre was truly shaming.

Best pre-match scoff: a few contenders here, but The Inn on the Green in Bristol with my pal Neil Tague was decent bar grub. Best take away was a massive piece of fish at Fleetwood, slightly edging it over cockles on Southend pier.

Best stadium: The stadiums in this division aren't great, if I'm honest. Including Ewood I've been to 20 grounds this season, 8 of them for the first time. Many are identikit new boxes on the edge of town like Scunthorpe, Walsall, Shrewsbury and Northampton. Or attempts at modernisation that create a mish mash of styles like at Bradford, Bristol Rovers, Peterborough and Fleetwood. The other failing of grounds at this level is the optimistic design. Swathes of empty seats in towering stands like at Coventry, Blackpool, Wigan and, ahem, Ewood, aren't great either. But for the proximity to the centre, a great view and a decent atmosphere, the best League One ground is New York Stadium, Rotherham.

Best station to ground signage thanks to visiting supporters trail of crude drawings on snow sprinkled car windscreens? Definitely Wimbledon, where every other car from Norbiton station to Kingsmeadow had been adorned with either a "BRFC" or a cock and balls. Thanks, lads. Which brings me to...

Worst ground, Kingsmeadow, the temporary home of Wimbledon isn't fit for purpose, as I said at the time. Best of luck on your journey back to Wimbledon, chaps.

Most shithouse team: Northampton Town, home and away, but especially away. Frustrating, hard to play against and celebrated a point like they'd won the league.

Best performance by a former player: Jack Byrne for Oldham was more Richie Smallwood than Richie Smallwood and more Peter Whittingham than him. A crime we never got the best from him. Terrific player.

Best team we played: I've been surprised how athletic and how fit most teams are at this level and no game has been a breeze, whatever the result. The main difference is that mistakes are more plentiful than the Championship, but for me the team that asked the most questions of us on the road was Scunthorpe.

Best cheeky diversion for one of life's delights: The Brick Lane Beigel Bakery after Southend.

Game I'm glad I didn't go to: the trip to Gillingham sounded dire, both times.

Game I wish I had gone to: I only missed six aways and three of them were midweek night matches, I refuse to go to Milton Keynes and had other plans for Charlton (I know). Plymouth was a stretch and the night matches at Gillingham, Portsmouth and Oxford just weren't practical. But I really think that win at Portsmouth was another positive turning point and I was gutted not to be there to see it.

Best flag day: We only had one outing for the flag at Doncaster (above). I sort of considered the pithy and curt "how does it feel to treat me like you do?" as a direct cock at the club in general and the owners in particular, so it's been folded up in a bag since Brentford last season. It wasn't until recently that I found myself listening to the song from which it comes (New Order's Blue Monday), that I reckoned you could view it another way. To "treat me" like you do. And we have been treated. Dack's magic, Charlie's leadership and his goals, the King of Ewood rarely giving the ball away, Danny Graham's poaching. It has been a treat.

Best thing about this season: Yes, winning again is great. But football is nothing without the fans. It's been a real blast to be fair. So thank you to you all for your contribution to the good times on the road this season: Robin Sager and Sam Taplin, Dave Smith, Mushtaq Khan, Andy Currie and Alex, Baz Dootson, Matt Dunham, Neil Tague, Stuart Shaw, Ian Herbert, Linz Lewis, Mikey Delap, Stuart Grimshaw and Matthew, Kamy, Jim Wilkinson, David Robinson, Kevin Bradley, Paul Oldrieve, Tony Leake, Danny Davis, Andrew Stirrup, Ian and Jan Currie, Andrew Currie, Matthew Currie, James Barrow, Tony Brierley, Steven Lindsay, Mike Kendal, Alec Craig, Trevor Curson, David and Pam Southworth, to all the Rovers fans who we've had a natter with on trains, concourses, stations, pubs and podcasts and most of all to my fantastic lads who've been on this trip with me, Joe and Louis.

Next weekend: Fortress Ewood?
Posted by Michael Taylor at 7:55 pm

Great stuff as usual M.
Always good to see you and Louis in a ground, near a ground or on an exceedigly long seaside pier.
Enjoy the summer and bring on the Championship.