Save me, from the makers of desperate TV 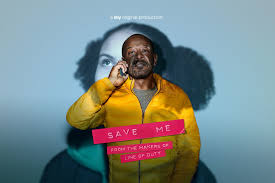 The most important element of any storytelling is how it ends. A very close second is how it starts. How it grabs your attention and says powerfully that this is worth sticking with. But the ending is everything. And have you noticed how many TV series now seem to end on a promise of more to come? It’s a hopeful wave at the possibility of a new series, or a disappointing whimper. The desperation to milk a format means that no happy-ever-after is an option. There has to be a loose end that remains flailing in the wind, even looser and freer than before, begging for someone to have another go to tie it up properly, rather than chuck it in the plot stream with all those other red herrings.

Spoilers follow, but the main point is a build up to tomorrow night’s Season 8 conclusion of The Walking Dead, a make or break moment for a declining franchise.

So it was been with the best series I’ve seen recently - Sky Atlantic's Save Me - where the conclusion is entirely unsatisfactory, yet utterly in keeping with everything that’s gone before. A roller coaster of a story, of (most remarkably) wit, redemption, true horror, twisted morality and a deeply depressing and unsettling glimpse of humanity’s narcissism and depravity. Second series? How can there not be?

Marcella left me with an entirely different feeling as Hugo Speer leaned over a dishevelled homeless person, talking about a secret unit of the police. Everything that had gone before, the ham fisted signposting of the supposed suspects, the wasted time on dead end story lines and the preposterous liberties with police procedures. All of it had me screaming inside, please end this. No more, no more. And then she finds a way to disappear, to vanish, but the so-secret-we-must-never-know-about-them-police find her. It seems to be a shrug. Less of a plea, more of a well, if you really must commission a third series, here’s your angle, but we really don’t believe you’ll go for it.

Poor Anna Friel, after bravely traversing the Sahara desert and battling rogue mercenaries in Odyssey, as a more Poundland version of Homeland, her next attempt to match Claire Danes (Carrie in Homeland) as the worst mother on television is so psychotic, so off the wall, even the makers seem to have given up. But this is ITV where nothing too absurd can ever be discounted.

BBC’s Come Home won’t ever come back. It was a bold attempt at addressing that most taboo of all last taboos, the crap, selfish and reluctant mother. I don’t know what it is with BBC series set in post-troubles Northern Ireland, but while The Fall was rapey and exploitive, Come Home was populated with snide and manipulative women all either lacking empathy or only capable of making poor decisions against the interests of children and hard working men. The only exception was the absolute beast of a criminal wife beater, but even with him we were invited to price in the possibility that he was driven to it.

And so to tomorrow night’s season 8 conclusion of The Walking Dead. I could write pages of fan theory and meta analysis of TWD, but all the failings of this series crash on the rocks of the basic season architecture. It has found a rhythm of predictability that has rendered it wholly absurd. As other critics have pointed out, it is a series with too little story and too much time to tell it. I said at the conclusion of Series 7, or half way through series 8, that nothing really happened since Negan killed Glenn and Abraham so brutally. There have been some interactions between the warring factions, but the same stand off pretty much still exists, it needs a dramatic stand-off with a firm conclusion, a seismic peak moment of television that the makers have deemed can only happen in 4 out of the 16 episodes of the season - the first, the last and either side of the mid-season break. It means there are 12 weak and plodding episodes that inch us closer to those points. There is no possibility of any major character being killed outside of those four episodes, stripping them of any tension or surprise. As ratings have slumped there is now a consensus that the stables need sweeping. Even in interviews with the producer who says this next episode will be an ending to all current storylines. I’ve had the advantage of reading the graphic novels up until the arrival of these crazies called the Whisperers (who wear zombie skin) and am up with the debates about who they might be, and if they might end up making an appearance in the TV series, or if they’re already around. There’s also the build up to the point about what to do about Negan. In the comics they keep him prisoner in Alexandria, skip ahead and several communities live peacefully for a while.

Here's what we know is going to happen: Morgan (Lennie James) is going to cross over into Fear the Walking Dead, there is going to be a severe change of plot and tone, something with the helicopter will be an important part of the transition. There is another community out there.

Here’s what I think should happen: Jadis, or the Oceanside women, should conduct a massacre of whoever they find as a way of marking their border, just as happened in the graphic novel. The mysterious helicopter needs to open a door into a much more imaginative post-apocalyptic social order than a dictatorship, linked to the appearance of Georgie. We're done with idiots like Negan and The Governor. Frankly, I'm done with Rick Grimes. A far better leader is emerging in Maggie, who still hasn't had her baby. She needs to execute Gregory once his cowardice and treachery are made tragically apparent. Eugene needs to go. He will probably redeem himself with some kind of sabotage of the Saviours weapons, but he'll still go.

Will that happen? I somehow doubt it, but it needs to, to actually prepare the way for what needs to happen in Series 9. The end of The Walking Dead for once and for all.
Posted by Michael Taylor at 6:11 pm