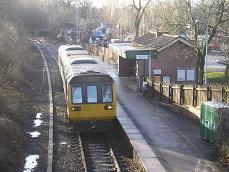 Us hardy commuters of Northern Rail have had to put up with a lot over the last few years. As working patterns change, cities grow, so does the popularity of taking the train to work in the morning. This has led to overcrowding at a time when the rolling stock is well past its sell-by date. The government issued Northern with a new franchise on the condition that the hated Pacers be replaced by 2020, and we have been assured that’s happening by the end of next year. What is more likely, however, is our lines will get the refurbished Sprinter diesel units which are still pretty noisy and have a higher doorway, which makes them hard to access for less mobile passengers.

We've also had to grin and bear it through regular strikes over future staffing levels on new driver only trains. Yes, the limited services are a disruption, but we cope. But it rather exposes a worrying intransigence on the part of Northern Rail management and the RMT Union that they can't sort this issue out.

I digress, but that’s important context. In May there is to be a new timetable, thanks to the Real Time Trains site we've had a glimpse before they are officially announced. It looks like the morning services are broadly the same, and there is a massive improvement in the frequency of trains in the evening. Currently, if you go to an event or work late, the next (and last) train after the 18:35 isn’t until two hours later, or you get one to Marple and hike up the hill. That’s changing and there will be two trains an hour up until 21:09. Inevitably the frequency of that service will result in more park and ride passengers utilising Rose Hill in the morning. The tweaks however don't make much sense. There will be a gap in service in the absolute peak time from the frustratingly early 17:10 (which was the 17:20 and will have worked well for people who finish work at 5) until 18:09! But there will be a 17:34 out of Piccadilly via Hyde, but running into Marple instead of Rose Hill.

As fellow commuter Catherine Waddington first suggested on Twitter this just has to be a mistake as it seems to clash with other Marple trains minutes apart and the return to Piccadilly is right behind a service from New Mills. I’m intrigued as to the planning process that has informed these changes. The wonderful Friends of Rose Hill Station conduct a survey on numbers, but I’m not aware of any detailed enquiries into why these changes are taking place in the shape they are.

Also, Piccadilly station will soon have the electronic barriers on platforms 1 to 3 which will make it even more crowded at peak times. Already my season card doesn’t work in barriers because my phone has damaged it, and I’m not convinced that everyone will have the ability to purchase a ticket by the time they get to Manchester and the rules are tightening on people who don't. Or maybe they’ll open the barriers as a free for all at peak times meaning the fare dodgers will take their chances like they do on Metrolink.

In the interests of fairness I've put these points to Northern Rail's press office on Friday morning, but they hadn't replied (it's Sunday now). I will update if they do.

Finally, it's difficult to understate how important to our service the local Friends of Rose Hill Station have been, improving the environment of the station and campaigning for improvement to services. Please sign up to receive updates and subscribe to support the excellent work they do on our behalf.
Posted by Michael Taylor at 9:48 am

A 17:34 train to Rose Hill would be really popular, given how busy the current 17:20 service is. Do they really think we can all go to Marple instead? What will happen is more cars on the road.