Here's a bit of a summary of my thoughts on the local council elections in my ward. It started with some tweets I rattled off in frustration at what was landing on my doormat, I hope I'm relaying the sentiment.

"Good grief local politics is so very shabby. Horrible race to the bottom to oppose speed bumps. Has no-one the courage to stand up for road safety? Dog whistle, dog dirt politics at its worst."

So started a tweet on Sunday morning, that became a thread and a bit of a rant. Sparked as it was by a truly appalling Liberal Democrat leaflet. It cut to the heart of everything awful about local politics. Jumping on bandwagons, lack of nuance, failing to lead, saying anything at all to get an angle. 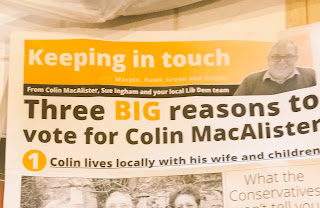 At my snarkiest I summarised my disgust thus: “Yes, I went into politics to really make a difference. I got rid of some speed bumps. Saved the suspension on some boy racer’s Subaru. Three children died, mind, but it’s a price worth paying to get elected.”

But it also brought me back to what I think the role of a local political representative is. Being elected should be about leading a community, not following or reflecting back the supposed popular will. And claiming local credentials as the NUMBER ONE reason to vote for someone is beyond laughable. Yes, when I stood in an election I told my story. People have a right to know, but THIS! This is treating the electorate like fools. A BIG reason to vote for him? No, Colin. You had three goes and that’s your best? 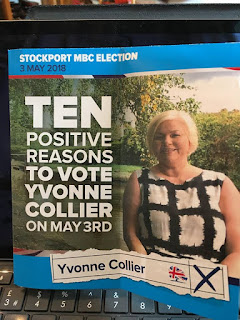 Sure, all politics is local. But it also doesn’t have to be parochial. And so I've also nothing but derision for Liberal Democrat rubbish about the Burnham Tax.

Then the Tory leaflet arrives.

I'll be honest, I'm not thrilled about their stance on the green belt and speed bumps, but at least they explain their alternative. As a piece of political communication it is very effective. You get ten "positive reasons" to vote for them with strong visual indicators. I'm not surprised at this, one of their existing councillors, Kenny Blair, is probably the best local councillor I've ever had represent me; smart, considerate and dedicated.

We delivered the first Labour leaflet for the candidate, Chris Wallis, a guy I really like. Local politics needs enterprising, popular, funny, energetic people like him. 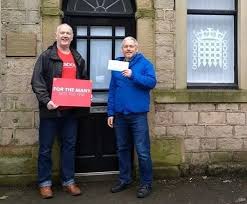 But I'll be honest, the more Labour nationally frame this as an endorsement of an alternative government, the less inclined I am to vote for them. The more this is about the make-up of a competent and forward looking Labour council in Stockport Town Hall, then I'm happy.

But when it's amateurs against professionals out there, you just have to ask yourself who you'd want on your side as your local representatives.
Posted by Michael Taylor at 10:01 am