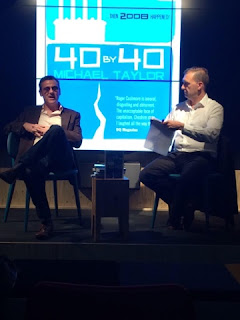 Launched the book tonight. I've been to plenty of launches where not much happens. Also been to a few signings and public events where the author does an intervew and a reading. So far, so good.

Tonight I actually interviewed the lead character of my own novel. Seriously. My friend Graeme Hawley, a proper professional actor, performed the role of greedy, grotesque Real Businessman of Cheshire Roger Cashmore so well, it was actually quite unnerving. It reminded me why and how I wrote the book. The experiences of horror at the hands of egotistical pyschopaths. "Great Lads" who think they are funny and clever who are used to getting their own way and force feeding their opinions on supine acolytes. Yes, them. Graeme was Roger tonight.

We effectively played it as a straight interview - scripted to a degree but with some really good ad libbing from Graeme who "got" the look, the tone and manner perfectly.

He was even accompanied by his security minder Alan Townley, played with great accuracy by, er, Alan Townley and his long suffering PR played by Lisa Ashurst, who is a PR.

I'd like to do this again, get some people from Graeme's world in, agents, producers and script people who could see what a brilliant performer Graeme is and how this would make great TV or theatre.

It's not for me to say if the book's any good or not, but I'm pleased that people seem to be enjoying it and it's selling well. After the first bit, we swapped roles and Graeme moderated a Q&A about the book and I loved reliving the experience of writing it - what the characters and plot devices related to. The role of journalism now, the difficulties of building empathy for a horrible character, the three act structure, how the book is ultimately about redemption and forgiveness.

Everything has to be doesn't it?
Posted by Michael Taylor at 9:23 pm

How can there be no comments and how cool and unlike me to be the first!

Michael you gave me the book two Fridays ago and despite a hectic work schedule AND a family break, I've read it, cover to cover. It is what I would expect from you; hard hitting, economical with words, incredibly laugh out loud funny, informative, insightful and hugely entertaining; sums you up really.

I'm delighted for you and hope it becomes the major feature film in which Leo the Wolf finally wins his Oscar (Best Supporting as Tosh or Sidney, depending on when)having at first won a Booker, or a Richard & Judy as Er Indoors just suggested.