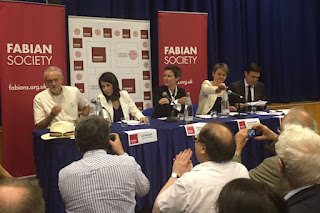 When Liz Kendall, Andy Burnham or Yvette Cooper are after our vote, we can ask them what they will do about Trident, about tax rates, about a Living Wage, about anything we want. We will ask them such questions because one of them will be our leader. We will not have any kind of expectation that Jeremy Corbyn is going to be elected leader, but amazingly he's going to be asked the same questions. As he was here.

This is the reason he gave Total Politics magazine as his reason for standing: "My entry into all of this was because a number of us on the left of the party thought there ought to be a debate about the economic strategy and how we deal with the issue of austerity…"

We will have a debate. We could always have a debate. It will doubtless spark constituency parties calling meetings, attended by a small number of activists, who will then declare that the massed ranks of the party locally have decided to back one or other candidate. And the local people will look at us and go, "Eh? Who are these people?" I've nothing against an exchange of ideas, of debate, of policies. As a party that process needs to be deep and wide and tall.

But surely, surely, we have to get past this shallow gesture politics, the resolutionary road to socialism.

And while I'm trying to cathartically lift myself from a slumber today, I have another real fear.

Raise this on any number of Labour blogs - as Jonathan Reynolds MP has done today - and look at the comments underneath. Abuse, hysteria and the default response to any suggestion you engage with people who voted Conservative - "You're just a Tory". You can get depressed about social media activity, just as you can get over-excited when it goes in your favour. But this is one lesson we don't need to import from Scotland: if you don't like what someone has to say, just call them a Tory. I don't think Jonathan could have been clearer about where Labour policies, values and campaigns should differ. But no, just chuck the abuse. Worked for the SNP, afterall, I just hoped we were better than that.

I hope we have reached what Jamie Reed called "peak bullshit" in this campaign and won't see any more of the ludicrous Taliban comment in the Telegraph today or we're in for a depressing summer of not getting anywhere at all, whoever we end up electing as leader.
Posted by Marpleleaf at 8:37 pm