Writing my first novel - the how, the why and the when 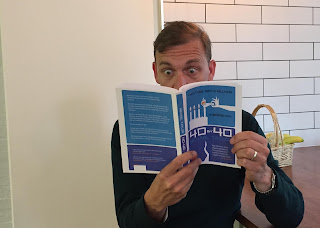 Each generation has an era defining time. The summer of love of 1968, the Arab Spring, the fall of the Berlin Wall in 1989. Ours wasn't a summer of love though, more an autumn of fear.

In 2008 it felt like the world was truly turning upside down. I can remember vividly the day when my savings account in a bank in Iceland was wiped out. How friends saw their businesses turn to dust. When our advertisers pulled plugs on everything.

I sat and watched it from the editor's chair, hearing stories of real drama, real fear and that feeling that this was a seismic, epoch changing time. This was our time and my novel, out now, is my attempt to tell this amazing tale.

I've always wanted to write creatively. Journalism is great, but sometimes news journalism doesn't give you that sense of perspective. As time went on and my job was more managerial, I had fewer and fewer outlets for that long form, investigative, exploratory story telling of human struggle. The kind of thing Michael Lewis is the absolute master at. And the kind of thing that if we managed to do three of them a year we'd enter them for awards, creating the illusion we do this all the time.

But I also quite like comedy writing, but have never done anything about it, despite having always knocked out the funnies page. Way back when I was a student at the University of Manchester I used to contribute stories to the Mancunion diary page at the back - often about Derek Draper, if I remember rightly. Wherever I worked, I always fell into the "back page" role rather well. I also developed fictitious characters to tell truths: Arty Tosh, Corporate Raider and Lucretia De Bitch.

In the course of my time I also wrote a column called Roger Cashman. He was a grotesque caricature of a greedy and sexist Cheshire businessman. He became a minor sensation on Twitter, even finding a nemesis in his wife, Doris, which was absolutely nothing to do with me.

For a while I kept it a secret that it was me. The chairman of the board highlighted it as his favourite part of the magazine and I had to come clean. We'd even get occasional letters of complaint, but more questions as to whether he was for real. My reply was always that he may or may not be real, but that everything he said was true.

But Roger Cashman is dead. He disappeared over the edge of his boat off Puerto Banus in 2011, only for someone to try and scam his Twitter account for personal gain in 2013. He is dead. Long live Roger. Another truth about business, cowardice and crime.

And so it is with my first novel - 40 by 40. The premise is simple. Here's our guy, rich, bored, on the brink of greatness and huge wealth in order to stave off a mid-life crisis. Setting himself up for a life of reality TV stardom, more easy money, sex on the side and of course the dalliance with football club ownership. You know that moment in Goodfellas, at the end of act two, when Ray Liotta's character has it nailed: "We were wise guys, Goodfellas, we had it all." Well, that's my central character of Roger at the start.

WARNING. Roger Cashmore is appalling. A monster. From the first words - "You can't go wrong with sick white children" - the calculating cynicism of charitable giving writ large - to his dismissal of his wife's concerns, his self-centred avarice, lack of loyalty and the essential split personality - wanting to be taken seriously by those he fears most. All of it makes him hard to love. But I hope you will end up rooting for him, hoping for a redemption of some kind, even if he doesn't get what he wants.

I know I did so with Jordan Belfort in Wolf of Wall Street, Steven Stelfox in Kill Your Friends and John Self in Money.

The jeopardy is the real world. This is 2008, we know what's going to happen in April when the tax rate changes. In September when Lehman Brothers crashes. In October when the UK government has to bail out RBS. And when Man United win the Champions League Final in Moscow in May, or when Manchester City get taken over by Arabs in September. That much we know, but where were you? How did those real events make you feel? Oh, and who do you think was behind Panacea in Alderley Edge getting burnt down?

I also wanted to weave in real people, real situations I witnessed - MIPIM, a conference where Jon Moulton spelled it out, a decadent birthday party I went to as the world crumbled. No real person in the book has words put in their mouth that they didn't say, or is placed in a situation that misrepresents them. They are as part of the physical backdrop as San Carlo Restaurant in Manchester, the Europa Hotel in Belfast and the Alderley Bar and Grill.

The one exception I ought to clarify is Simon Binns. Part of Manchester's business scene at the time was a spiky newspaper called Crains. To airbrush that from the picture of the year would be dishonest, much as I despised it at the time. With Simon's help I actually wrote a scene with him in it, having lunch and interviewing the main character. Although Roger is phenomenally rude about Simon, I think I know him well enough to know he'd take the confected affront at his nosiness and contrary opinions as a compliment. It was certainly intended as one.

The book isn't just a ramble through the archives either. I spent a bit of time talking to people who dealt with builders, helicopter leases, TV companies, banks, lawyers, phone hackers and football club owners. Explaining how quite complex financial instruments worked, but also how criminal gangs sometimes operated. I couldn't resist weaving in a reference to the Learning Journey I did to California.

In the credits I do thank the following fine folk for helping me with the research: Nick Carter, Alec Craig, Andy Shaw, Steve Hoyles and Eliza Manningham-Buller, the former head of MI5. But there are many many more.

There will be inevitable speculation about who the characters are based on. None of them are a direct lift. None. Some are just inventions, some are amalgams of at least two or three people. An acquisitive Indian food conglomerate called Chunky's doesn't leave much to the imagination. But it's a work of fiction - a way of telling a truth through invention.

I would say it's one of the most incredibly exhilarating and challenging things I've ever done. But then I said that about being part of an MBO, setting up a new business and standing as a parliamentary candidate. It's all true.

I'm now working on the follow up. It's called We're All In It Together, set in 2010, and Roger is standing for parliament in a challenging seat. Not that I'd know anything about that.

If you fancy coming to the launch on Friday, click below and reserve your personalised copy.

Posted by Marpleleaf at 8:06 pm