Penistone Literary Festival and a few questions about the book 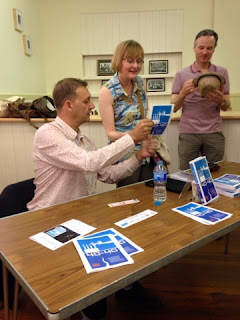 There's something really exhilarating about book festivals and author events - I go to a fair few myself, so it was great today to be at the front doing a reading from my book, 40 by 40, and taking questions in my slot at the Penistone Literary Festival.

I'm going to be speaking at an event called Darkness and Decadence with Lynn Gerrard on the 24th of July at the Nexus Cafe as part of the Manchester Fringe Festival.
I've also done an interview with local author Paul Beatty.

1. Please tell us something about yourself.
As it says on my Twitter: Marple dwelling father to 5, writer, business thinker, debate curator. Catholic. Stood for Labour in 2015. Arte et Labore. A lover not a fighter.  Or as some prefer: “Vacuous careerist and Mandelson crony”.
2. Your new book 40 by 40 is your debut novel. What’s it about?
Redemption and feminism. Actually, it’s a bawdy comic thriller about a vile sexist business bad boy set in Alderley Edge and Manchester in 2008, the year it all came on top. "A riotous skewering of the worst excesses of laddish business culture, with full due diligence done" according to The Big Issue in the North.

3. Where did your inspiration and motivation come from to write 40 by 40?
I had a ringside seat for our era defining year as a business journalist. Everything in the book is sort of true, even the bits that aren’t real.

4. How did you get away with adding real actual people into the story, like Sam Allardyce, Jon Moulton, Tom Bloxham and Rio Ferdinand?
They’re the backdrop, the background noise to the events of the year. I got some permissions, some I took out on legal advice. As long as you don’t degrade their persona, what harm could it do?

5. Is the central character actually based on a real person?
At least half a dozen high profile Cheshire dwelling entrepreneurs seem to think it’s them. So obviously, no.

6. What books do you read for pleasure and why?
Crime noir (Raymond Chandler, James Crumley and JJ Connolly), great American novels (Cormac McCarthy), long form journalism (Michael Lewis), I’ve read everything by Christopher Hitchens and George Orwell. Helps me see the world as it is.

8. What is your writing process?
Fits and starts, then a final flourish.

9. What will be your next writing project?
The follow up is already in play – We’re All in it Together, where our guy stands in the General Election in a challenging seat, for the Tories.

10. What tips would you give to someone writing their first novel?
Write about what you know.

Posted by Michael Taylor at 8:13 pm