Summer reading special - are the characters in 40 by 40 real? 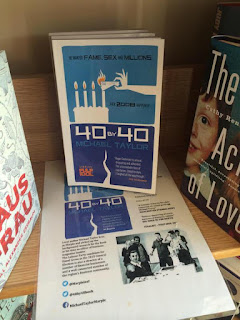 Roger Cashmore, the central character in 40 by 40, is obviously fictional. But there are truths in his persona. People tell me they know who it is based on. And they are right. Even if it's a different person every time.

One of the key lines in one of my favourite films is: "The greatest trick the devil ever pulled, was convincing the world he didn't exist."

Some of the other characters are also "inspired" by people I've come across, there's also an "easter egg" in the naming of all the minor characters. There's a lunch at San Carlo, or a coffee in Costa in Alderley, for the first person who can spot it.

I was asked another great question for a piece in The Big Issue in the North. Why include real people and situations?The answer is in the interview below.

And if you'd like to order the book, pop into your local bookshop - including Waterstones, or order from Amazon. We have a few events lined up - hopefully one at Waterstones in Wilmslow and another in Alderley Edge.

Where did the idea for the book come from?

I’ve always wanted to write fiction, but on the basis you should write about what you know, the subject matter jumped out at me. I had a ringside seat for the biggest story of my journalistic life. I loved Kill Your Friends by John Niven, which is about the music industry in 1997, it tells so many truths, as you’d expect from a former A&R man, despite being a work of fiction. Truly, 2008 felt like it was the last days of Rome, fortunes were lost, reputations trashed, people died. I also wanted to weave together some extra jeopardy by putting the twin worlds of hooligan gangsterism and serious business together.

What’s the key to creating a monstrous character who will still engage readers?
Two things, making him darkly funny and letting the reader know that he’s not as clever as he thinks he is. Flag up a few obvious clues that he’s heading for a fall. If you think about, that’s what made Wolf of Wall Street watchable. With my central character,  Roger Cashmore, he’s got his money in an Icelandic Bank on the Isle of Man, it’s 2008, you know that isn’t going to end well.

Why did you decide to include real people in among the fictional characters?
As it’s set in a real time and place, Manchester and Cheshire in 2008, where real events happened and I was a witness to them, it seemed mad not to. It roots it in reality and makes it all the more plausible. Why invent a moment when everyone was warned about the looming global financial crisis when one actually happened. A conference in May 2008 at the Yang Sing restaurant,  where Jon Moulton predicted it all, I was there, I took copious notes, I have his slides, I have the guest list, all the other people in book who were there - football managers, property developers, big hitters - all add colour. You literally could not make it up.

There’s insider detail on everything from corporate espionage to complex financial instruments. How did you go about your research?
Talking to people, lots and lots of people. It’s my job to understand corporate finance and understand the way that world works. The money laundering and the espionage stuff came from a detailed briefing from a real spy. I also interviewed Eliza Manningham-Buller, the former head of MI5, but she didn’t tell me any secrets as such.

Was it easy to find your fictional voice after a career in journalism?
I did write a spoof column for a few years where the voice was honed. In many ways it was easier to tell this story through that prism, as I could take liberties. I do really admire long form journalism and the sketch portraits of a crisis that Michael Lewis does so well in the Boomerang: The Meltdown Tour. I could have done something similar but there are fewer outlets for that.

Are women really as sidelined in North West business as they are in the business world portrayed in the book?
Less so now, happily. But just look at the Rich Lists and the Power 100 – overwhelmingly male, pale and stale. But although the book is centred on Roger Cashmore as a sexist arse in a world of “good lads” it is also a book about redemption and lessons learned. It has to be, doesn’t it?

Will Roger Cashmore be the progatonist of another book?


Absolutely. I’d like to fast forward to 2015 in a slightly different world, where a bruised and confused Roger is up for something new and stands for election in an unwinnable seat, for the Tories. I’ll call it; “We’re all in it together”.

Do buy the Big Issue in the North off one of the vendors when you're out and about. It's a great social enterprise originally set up by my friend Ruth Turner and now edited by my former super sub Kevin Gopal.
Posted by Marpleleaf at 3:03 pm