Toast Deli in Marple is no more - very sad 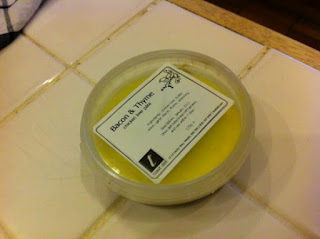 I was saddened to see that Toast Deli in Marple has shut its doors for the last time today. They offered a pleasant ambience with a modern foody feel. We had a delicious cooked breakfast there one Saturday and their coffee was excellent. The chicken liver pate (pictured) is a delight, though I last bought mine from our butcher in Romiley. Toast also worked hard on the community events and there were rave reviews for the tasting evenings. But, it must have been tough competing with All Things Nice, just 30 yards away, and though I divided my loyalties between the two, this does nothing to assuage my feelings of guilt that I didn't go there more often, or genuine sadness for the lovely staff in a place that tried to be new and different.

But the grim reality of the demise is what it says about Marple. Toast would probably thrive in a different location, not so far away. Dutsons and Libby's are doing well in nearby Marple Bridge, while Bramhall has quite a restaurant scene these days. Toast would have done so much better there, it would seem.

As one door closes two more open - a cafe and sandwich shop called Truly Scrumptious on the old site of Grenaby Farm Bakers has just opened; while Rileys, a new newsagents and butty bar opposite Costa Coffee on Stockport Road, is up for it. I'd argue that Grenaby couldn't live with Greenhalgh's and Greggs for cheap pies and bread, which leads you to think why do more of the same. While the popularity of Costa must have really hurt Toast and near neighbour All Things Nice, it has gained a certain magnetism even with grumpy staff. I wish the two new businesses well, but it is a tough market with the ever creeping presence of multiples making it harder for quality independents.

I also posed the question on this blog last week as to whether Marple was a Waitrose or an Aldi kind of place. I rather think we've just had the answer.
Posted by Michael Taylor at 6:54 pm

I think Marple residents need to be VERY clear about what they want. Toast's dimise at the hands of Costa is a perfect, albeit small scale example of what happens when the national brands move in to a town. That's not to say Toast didn't make mistakes, but when a business's core income stream is affected so much its very very hard to survive.

Beware Marple, Asda will come and the town will change drastically.