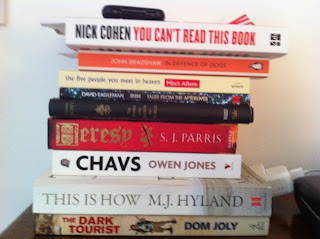 Remember beach and villa holidays where you'd read a book a day? Vaguely. I ambitiously took a stack of books I've been looking forward to reading. I was mildly disappointed in them all.

Dom Joly's Dark Tourist wasn't as funny as I expected it to be, nor as angry about the way places like Lebanon, Cambodia and North Korea are like they are. It's a strange juxtaposition, an anarchic comedian known for his irreverence visiting places that require sensitivity and reverence. That said, I enjoyed his anecdotes.

Reading Owen Jones' Chavs is like sitting opposite someone on a train who just goes on and on, and you end up just losing the will to argue anymore and end up agreeing with them. His central premise that the white working class have been unfairly demonised is fair enough. Where I dispute his argument and his conclusions is his ascribing a raw agenda of class war to Conservatives and a rather rosy view of unions and their role in workplaces. As a polemicist he's entitled to use any device he likes to make his point, but it tends to come across as rather shrill. In his new introduction, and lately on Twitter, he's addressed the riots of last summer. It was not a protest, it was raw criminality. To fail to acknowledge that is the politics of fantasy.

I enjoyed Nick Cohen's book, but his punchy style left me exhausted. There's too much "yebbut" - who are the people he is attacking, through such a wide subject as freedom of speech and censorship?

"Because they believe the real enemy is at home, Western radicals ignore the victims of dictatorial states," he says. I'm not sure what some idiots on Comment is Free have to say is that important, to be honest. I loved What's Left?, his broadside on the decline of the moral left in Britain, but there are bigger subjects involved and far more deserving of scrutiny.

The whole issue of freedom of speech is currently at the centre of so many warped and undeserving starting points - Julian Assange, people who set up fake Twitter accounts, racist footballers, internet trolls. The moral maze is complex indeed.
Posted by Michael Taylor at 10:34 pm