Northern Monkeys - a book about growing up 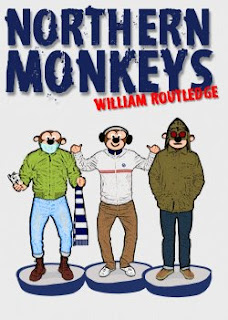 Next month will see the publication of a book I've been working on for the last few years. It's called Northern Monkeys and it's a journey through working class social history in the North of England.

At its centre is the "casual/dresser" scene of the 1980s - lads going to football in gangs, dressed to the nines in designer sportswear and often with violent motives. For me and Bill Routledge, the prime mover and guiding hand of the project, it's the period that defined and changed everything. Fashion, sport, work, pride, politics and it all came together in this uniquely volatile period of recent history. The book covers where it was all rooted, what it was like to be there at the time, who was first, how the looks of the time quickly mutated and how the key figures at the time went on to use that mindset to influence music and fashion to this day.

But to see it as a book about football casuals is an epic understatement. Its central core is a way of interpreting that movement and putting it slap bang in the context of some seismic social and cultural changes.

We start with tales of post-war austerity, moving through the sharp suits, the Teddy Boys and the Cunard Boys - Liverpudlian seamen who would stock up on rare fashion items on their international jaunts - clearly influencing their sons and heirs in the Transalpino era. Male narcissism and looking good was nothing new, of course, and the pack look of football lads of the 1980s clearly cocked a nod in the direction of the Mods and even skinheads of the previous two decades. Different scenes also fed into it - we've got a whole section of memories from Northern Soul devotees and the look and lustre of nights at Wigan Casino and Blackpool Mecca.

Where this look differed for those of us in Northern towns was that it was more DIY than many have previously acknowledged. The early Scouse pioneers tracked down rare Adidas trainers in Germany, the Manc innovators plundered market stalls for flares and leathers as the look evolved. But my early memories of the developing style was rooting out a Fila tennis top at Lancaster University sports shop, finding Pringle in old man's shops and a Peter Storm cagoul in an outdoors shop. For many it was about buying the look off the shelf in Hurleys in Manchester or Wade Smith in Liverpool, for early adopters, it never was. 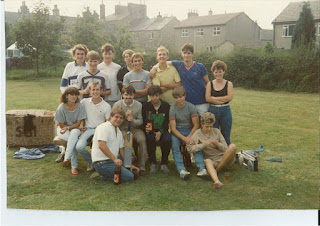 The compiler of this has been a lad I'm now proud to call a good friend, Bill Routledge. He's cajoled and persuaded a huge range of mates and contacts to contribute various tales, some going back to the post-war period of austerity and community building in Northern towns like Preston, others are boot boys, skinheads, rockabillies and the most dominant cult of them all at the dawn of this movement - the punks. Bill and his crowd in Preston in 1981, like me and my Lancaster mates (pictured, right, in 1984), made a transition from punk to "football lad" - it was a remarkable transformation. This was the closest I ever got to being in a "firm" - Lancaster, Morecambe and Carnforth lads all supported different teams, the picture above covers lads who followed Blackburn Rovers, Morecambe, Manchester United, Blackpool, Rangers and Spurs, from memory. Can you spot me, by the way?

I've always carried this look on. During Fresher's week at University in 1985 I was turned away from the goth and punk night at the Ritz in Manchester for wearing chinos, deck shoes, a Lacoste polo and a red Italian chunky jumper. It didn't have a name then, but this was the emerging Paninaro look. By the time of our third year my mates were well into looking smarter too - we liked Chevignon, Chipie, C17 and Timberland for a night at the Hacienda or the Venue, way before the Madchester druggie rave scene. By the time we moved to London, the treasure trove that was Shop 70 on Lamb's Conduit Street in the 90s was a delight, and a few pieces of Stone Island and CP Company still adorn my wardrobe as a tribute to that era and that look.

For my bit of the book I've interviewed Robert Wade-Smith, Barry Bown from JD Sports and Gary Aspden, the former brand director of Adidas, as well as commissioning a few tales from lads who were there with stories to tell. The stories are long and revealing and I like to think I get what they're about, the journey they've been on and how their interpretation of brands and street fashion influenced the high street today.

One thing Northern Monkeys is certainly not is hoolie-porn, there's been enough of that to be honest, but it doesn't try and sugarcoat a movement that had football violence as one of its core identifiers.

So, here's the Northern Monkeys website, have a nosy at that. There's a Northern Monkeys Book Facebook page which we're using to gather some extra pictures and messages and you can join in this majestic nostalgia fest on Twitter by following @MonkeyNorth.
Posted by Michael Taylor at 9:06 pm

Hi Michael, looks a good book. Great rating on Amazon. Where do I get it from - Amazon was sold out/not in stock. Jim (your US trip friend :-)